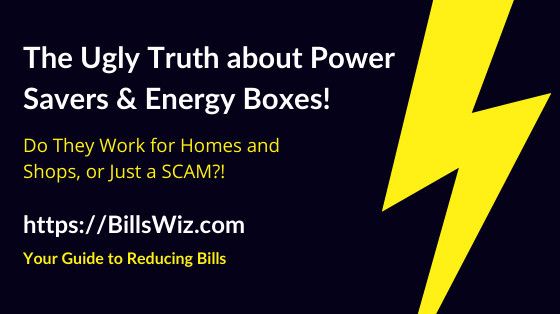 Do power savers really work, or are they a new scam that is being heavily advertised to people who have no technical knowledge?

I’m an experienced electrical engineer and certified energy manager, and I will tell you the honest answer about this energy saving boxes and power savers for homes so that you spot the scams and protect yourself.

And don’t worry, because I will also give you examples of legit electricity saving devices that work.

These are designed to help the sellers make money from whoever purchases them thinking that they can help in saving money on the energy bill.

Why Are Energy Saving Boxes Not Worth The Money?

It’s because they don’t work as advertised by significantly cutting the electric bill.

The way that power saving devices such as energy saving boxes, power saving plugs, and other similar products are advertised is either based on some secret energy source that no one knows about, or based on the fact that they do power factor correction or voltage stabilization to the extent that is supposed to reduce electric bill.

And from my experience in electrical engineering and energy management, I can tell you that these claims are incorrect as you will see next.

I have explained in another article why you can’t reduce electric bill with capacitors at home. 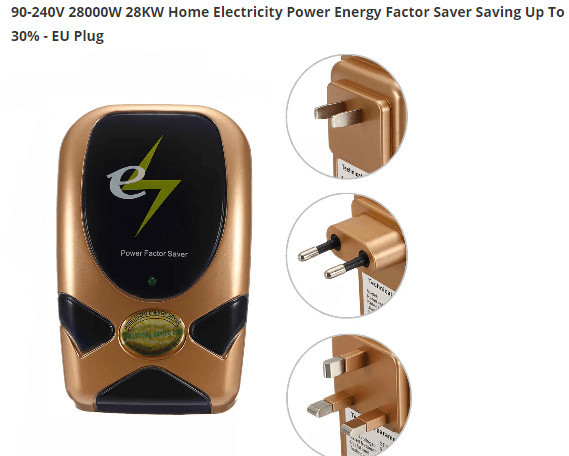 But in short, there’s something that is called the power factor, which is normally less than 1.

The lower this power factor goes, the higher the losses on the utility company will be.

This is why some companies charge customers an extra fee if the power factor went to a low level such as 0.8, mainly caused by having many motors connected to the meter.

And that’s why, only industrial consumers need to do power factor correction, and it cannot be done with a small box, but it needs calculations from a specialized person in order to do the necessary sizing of the capacitor.

And the ones trying to sell you the power factor correction device for home are lying to you by telling you that it helps you by reducing the electricity bill.

The meter at home doesn’t read the power factor, and therefore, you won’t get charged for it at home, shop, or office.

This is why there’s no point from using a power factor correction box, aka capacitor box, at home or at non-industrial places.

The plug-in power saver that is advertised as one that stabilizes voltage in order to save you money is another big lie that doesn’t work.

They tell you that voltage bumps and irregularities can increase an unnecessary energy to be consumed, and that these devices stabilize the voltage and regulate the current at home, which leads to less consumption, and up to 20%-50% saving on the bill!

The voltage reaches customers stable and regulated, and if there’s any distortion or bumps in voltage, it would be very low, and doesn’t really cause an increase in the bill, even to the extent of 5%.

For example, the voltage at US and Canada is rated at 110V, and at most of other countries at 220V.

The utility have protection systems in place that will trip off the main circuit if the voltage increases more than, let’s say, 3%.

So, let’s assume that the voltage might increase at some point by 2%, that’s fine as it won’t harm the equipment, and it will not cause an increase in the bill that can be saved by these energy saving boxes or devices.

The saving that this box would make, assuming that it really works, would be very negligible and won’t make up for the high price that you paid in order to get it. 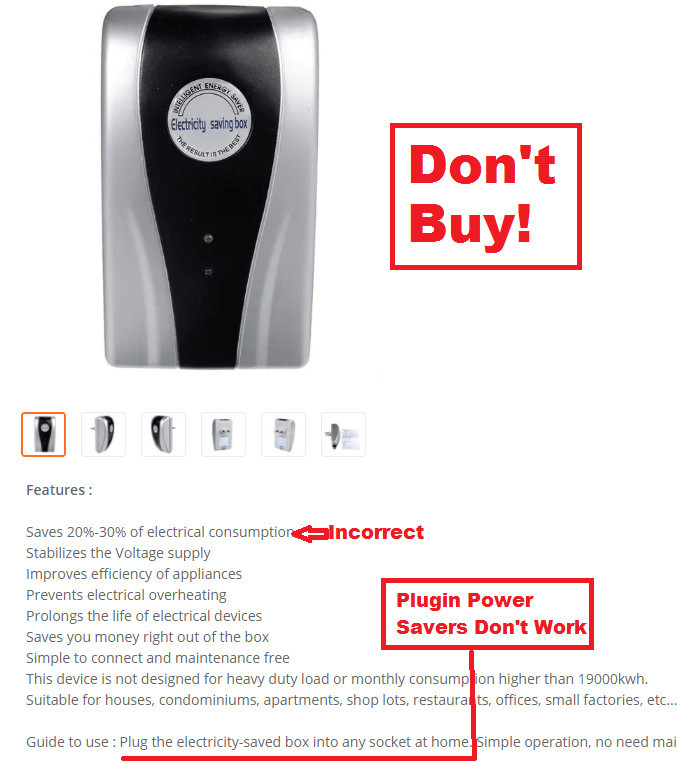 There are some power saving boxes that are advertised as boxes that can bring some lost energy and give it to your home for free, and you need to connect them to the panel beside the electric meter.

And these are sometimes advertised like the two previous types, either as power factor correction capacitors, or as voltage stabilizers. 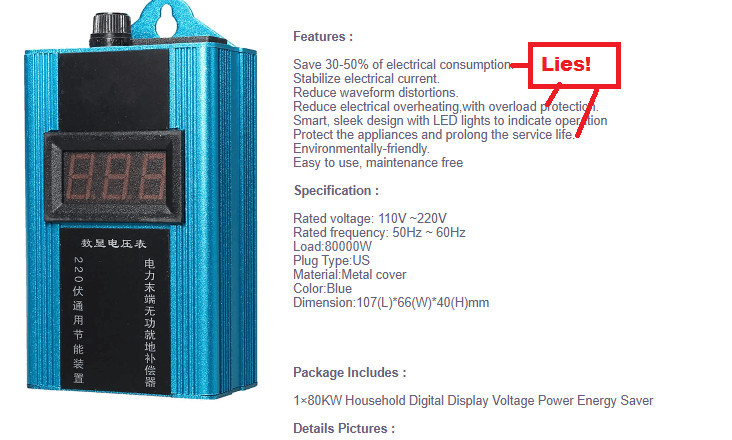 I have already explained why voltage stabilizers and power factor correction boxes for home don’t work.

But when it comes to having a secret source that gets you free electric energy, then that’s a complete lie.

As per the law of conversation of energy, energy can neither be created nor destroyed; but rather, it can be transformed or transferred from one form to another.

There’s no point from using this box, because all the electric energy you will get will come from the utility meter, and not from the box, which means that you will be charged for every single penny.

All of the claims about these energy saving boxes don’t work.

As explained above, don’t buy devices that promise to cut the electric bill based on unsupported claims, or based on some secret that doesn’t exist.

The saving should come based on a scientific fact, such as:

Here are some examples of real power savers for home that work and lower the electric bill:

Appliances that have the Energy Star label, which is based on a program run by the Department of Energy in order to recommend appliances that are built based on the latest energy efficiency practices and technologies.

Like solar attic fans, solar lights, solar cookers, solar water heaters, and many other appliances and systems that have their own system that collect the energy coming from the sun and turn it into electricity or heat.

Like the complete solar panel system for the whole house, the small wind turbine for residential use, or even portable solar power generators with batteries.

Like the LED lighting bulbs that are much more efficient that halogen bulbs or even CFLs.

Because if you save on hot water, you can save on the electric bill as a result if you were using an electric water heater.

And don’t forget that you will save on the consumption of water pumps when you use less water, whether cold or hot.

If you want more specific examples, then you can read my list of 15 real electric energy saving devices for home, and the other list of 15 devices to reduce electric bill in any place.

No, don’t buy any of the energy saving boxes or power savers like PowerVolt, Okowatt, Power Save, …etc.

Energy Saving Boxes & Power savers don’t really work for houses and commercial consumers as they are being advertised.

Check out the two lists mentioned in the last paragraph of the previous section for energy saving devices that really work.

And if you have any question about anything here, or about a specific device, please, leave it in the comments’ section below, and I will do my best to help you out 🙂