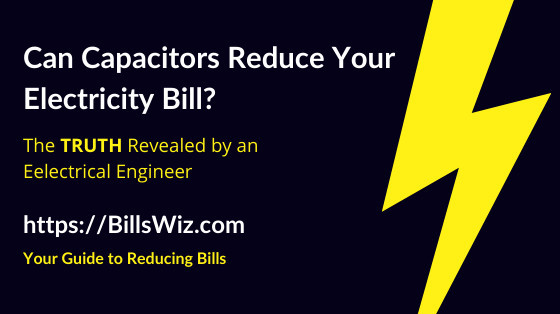 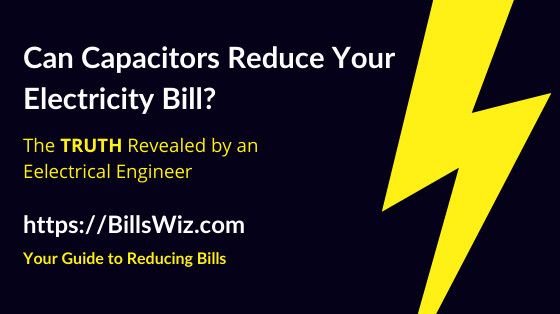 There have been many products being heavily promoted recently as power savers that can reduce your electricity bill through power factor correction capacitors, but the real question is:

Can a capacitor reduce electric bill?

or is it just another scam?

Especially when it comes to domestic or residential consumers and small business owners.

I’m an electrical engineer with 10+ years of experience, and I will give you here the honest answer so that you don’t get scammed and spend money in the wrong place thinking that you will save on the electricity bill.

Can a Capacitor Reduce Electric Bill?

How Do Power Saving Capacitors Work for Some Consumers?

The way how capacitor can minimize the electricity bill depends mainly on how the utility company charges the consumers.

I will make this simple and easy to understand for everyone without being an engineer.

When it comes to electrical loads, the energy withdrawn from the utility company has two main components:

And this is what we get billed for and what we pay for mainly.

However, when it comes to appliances that have motors inside them, such as fans, compressors, and pumps, they withdraw the reactive energy from the utility, which is not actually consumed, but it is necessary to cause the motors to rotate, and hence the name, reactive power. 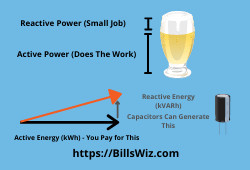 When it comes to residential loads and small commercial loads, the reactive power or energy consumed is usually very low, and doesn’t exceed 10% of the active low consumed.

And therefore, the utility company doesn’t charge for it as the normal meter we have at these places only measure the active energy consumption (kWh).

Therefore, it will require a high current (Amperes) causing heat in the cables of the electricity company, which leads to economical losses for these companies, and they will start charging these consumers for the reactive power they withdraw, which can be measured through special meters that record both, active energy (kWh), and reactive energy (kVARh).

How Capacitors Can Reduce The Bill for Industrial Consumers?

The way capacitors work for industrial consumers with loads and machines that have big motors, is that the capacitor will counteract the effect of the coils in the motors, and it will generate reactive energy and give it to these motors instead of withdrawing it from the utility meter, and therefore, their meter will not record reactive power consumption as they don’t take it from the utility. 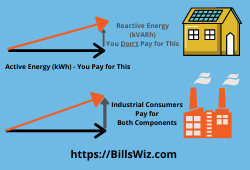 And this is how industrial consumers can reduce their electricity bill using capacitors and capacitor banks.

What about The Power Saving Devices & Capacitors Being Promoted to Small Energy Consumers?

I’m sorry to say that power saving devices and capacitors (aka Power Factor Correction devices) for homes are just a flat out scam.

I’m an electrical engineer and I know very well that these are unnecessary as they can only generate reactive power and not the active power that small consumers like domestic consumers and small commercial consumers consumer.

Therefore, the power saving devices and capacitors are not necessary for these types of consumers.

If you have a small business and you still want to make sure, you can check your electricity bill if it mentions anything about the reactive power/energy (kVARh), or if it mentions something called the Power Factor fee.

If it doesn’t, then you are only charged for the active energy you consume, which, which again, cannot be generated with the power savers promoted.

Or you can just call the billing department of your electricity supplier and ask them if you get charged for the reactive power and therefor you might need to install a capacitor.

Why Are Others Promoting Capacitors to You?

If you are a homeowner or you have a small commercial business and someone is heavily promoting capacitors and power factor correction devices to you claiming that they can reduce your bill even 1%, then highly likely that these people are getting paid a commission on every victim they bring to the company selling those devices.

They know that people try to desperately save on the electric bill by different ways like trying to use magnets to stop the electricity meter for example, and they think that there’s an opportunity in scamming these people by claiming the capacitors can help them reduce the bill.

Conclusion – Should You Use Install Capacitors?

If you are a residential customer, and your meter reads only active power/energy (kWh), then you should not worry about installing a capacitor as you don’t get charged for the reactive power that the capacitor can help in producing.

If you own or run an industrial plant or a big commercial facility and your meter reads the reactive power/energy (kVARh), then you should check your bill and see if you are being billed for the reactive power withdrawn, and then decide if it’s viable for you to install a capacitor in order to reduce the bill, but you need to check with a specialized person to make a study for you and tell you the suitable device type, rating, and price.

Capacitors can Lower electric bill for industrial customers and not for homeowners.

2 thoughts on “Can a Capacitor Reduce Electric Bill? (The Truth Revealed)”