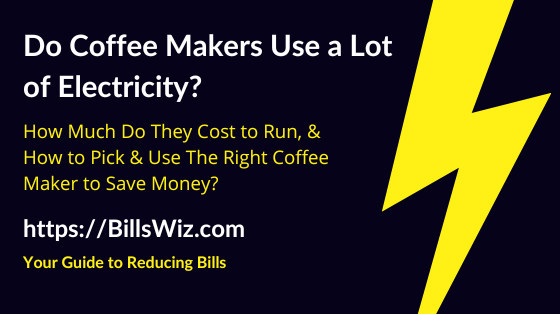 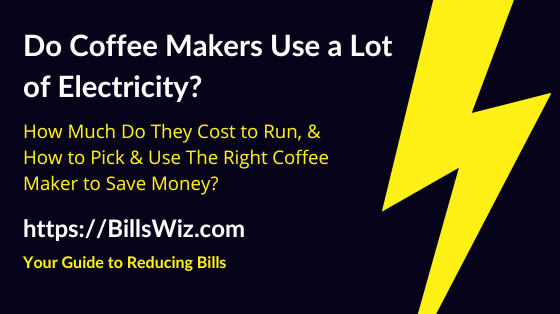 Do coffee makers use a lot of electricity and increase your bill?

How much does a coffee maker costs per day and per month, and how to choose and use the right coffee maker in order to keep your energy consumption and your electric bill as low as possible?

These questions and more I will be answering in this short guide, in order to help you make the right decision.

Do Coffee Makers Use a Lot of Electricity?

While coffee makers usually have high wattage of 550-1,350 watts, and draw a high current when they are running, but they actually don’t use a lot of electricity in total as they don’t run for long periods of time. (Usually, less than 1 kWh per day)

This is because most of the coffee makers take only between 5-15 minutes in order to brew coffee, and this applies to a single cup coffee maker or espresso machine, a medium capacity coffee maker of 4-5 cups per brew, or the bigger coffee makers that can prepare up to 12 cups or more per brew.

The wattage of a coffee machine changes from one size to another and from one brand to another, and that, along with the usage behavior, affect that amount of energy consumed by the coffee machine, which is what you get billed for in the electricity bill.

For example, some drip coffee makers have heating plates that would consume electric energy for few hours after the brewing process has been completed, in order to keep the coffee in the glass carafe warm.

Also, the stand by mode of coffee machines consumes some energy, which means that you can reduce the electricity consumption of a coffee maker by turning it off or by unplugging it after you brew the amount of coffee you want.

How Much Electricity Does a Coffee Maker Use?

On average, coffee makers use between 0.25-0.75 kWh of electricity per day, depending on the type and size of the coffee maker, the usage pattern, and the number of times you brew coffee with it.

How did we get these estimates?

You can estimate the electricity consumed by a coffee maker by knowing how much power it draws while running, the time it uses in order to finish one brew, and the number of times you run it per day and per month. 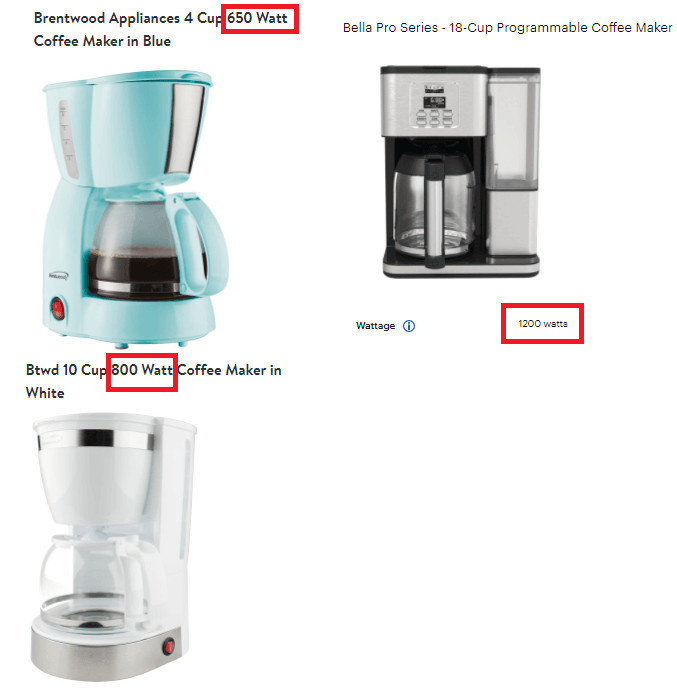 It is important to note that some coffee makers still consume energy even after the brew is completed, especially the ones with a glass carafe, and this electricity is mainly used to keep the coffee warm for few hours through a warming plate under the carafe.

The warming plate uses between 50-200 watts on average, and most coffee makers will keep it running between 3-4 hours after the brew is finished.

Assuming the average 100 watts (0.1 kW) warming plate, and assuming that it runs for three hours after the brew is finished, then the energy consumed per three hours is:

Add this to what was consumed during the brewing process (0.25 kWh), and the total would be around 0.55 kWh of energy that is consumed per serve for brewing and the warming process for few hours.

How Many Watts Does a Coffee Maker Use?

Most of the coffee makers use anywhere between 550-1,350 watts of power in order to run, based on the manufacturer, the model, the time needed to brew coffee, and the capacity.

Some might even have a higher wattage of up to 1,800 watts.

And these would normally take between 9-15 minutes in order to brew their capacity of coffee.

Some drip coffee makers have the capacity to brew one cup of coffee per serve, and these might consume anywhere between 600-850 watts on average, which is close to what a 5-cups coffee maker uses, but the single-cup coffee maker will finish the serve in a shorter period of time, typically 3-5 minutes, which makes the energy consumed per serve to be less.

How Much Electricity Does a Bunn Coffee Maker Use?

On average, a Bunn coffee maker uses between 1-1.8 kilowatts of power in order to run, and takes between 3-10 minutes per brew, which translates into 0.09-0.15 kWh of energy per brew. 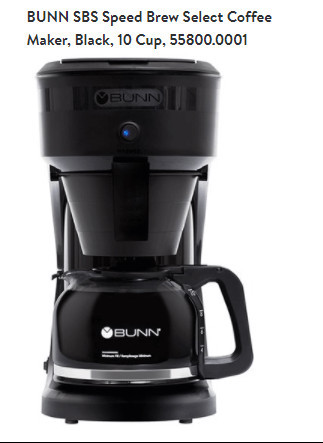 There’s a warmer that can consume between 50-100 watts while running in order to g, which translates into another 0.1-0.2 kWh if you leave it on for two hours after it finishes the brewing process.

Add that to the energy consumed for brewing, the total would range between 0.2-0.35 kWh per serve that a Bunn coffee maker consumes.

How Much Electricity Does a Keurig Coffee Maker Use? 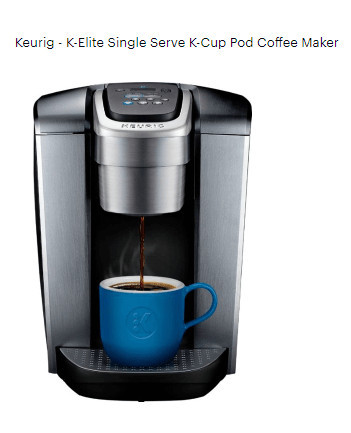 Assuming that you brew three cups a day with the Keurig coffee maker, then it consumes around 0.225 kWh per day.

Per month, the Keurig coffee maker uses around 6.75 kWh of energy in order to prepare three cups of coffee per day, every day of the month.

How Much Electricity Does a Nespresso Coffee Maker Use?

A Nespresso machine uses around 1,350 watts of power in order to run, and prepares one shot of espresso in around one 1-2 minutes. 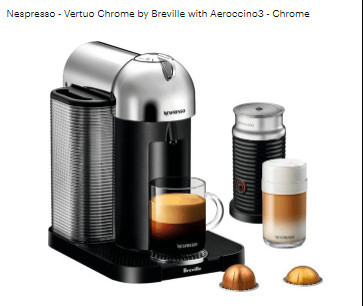 Per month, the Nespresso machine would use around 6.75 kWh of energy for brewing five shots of espresso per day.

Despite their high wattage, coffee makers increase your electric bill by a small amount in the range of few dollars as they don’t need to run for long time intervals.

Keeping the warming plate on for long hours after brewing is complete it increases the amount of increase on the electric bill, and brewing several times a day increases the cost of running the coffee maker, but most people don’t brew coffee more than once or twice a day with the coffee maker with carafe.

For a single serve coffee maker, you may run it several times a day, but the short duration of brewing one cup means much less energy consumed per brew or serve, and thus, does not add a significant amount to your bill.

How Much Does a Coffee Maker Cost to Run?

A coffee maker costs between $1 to $3.15 per month based on the average coffee maker wattage of 1,000 watts (8-10 cups capacity), the average warming plate of 100 watts that runs for two hours after brewing is finished, the daily coffee maker use of one brew or serve, and the average electricity price of around 14 cents/kWh.

The actual cost of running the coffee maker might increase or decrease based on the actual machine you have, the usage pattern, the use of a warming plate, the frequency of running the machine, and the electricity price as energy companies charge different rates from one another. 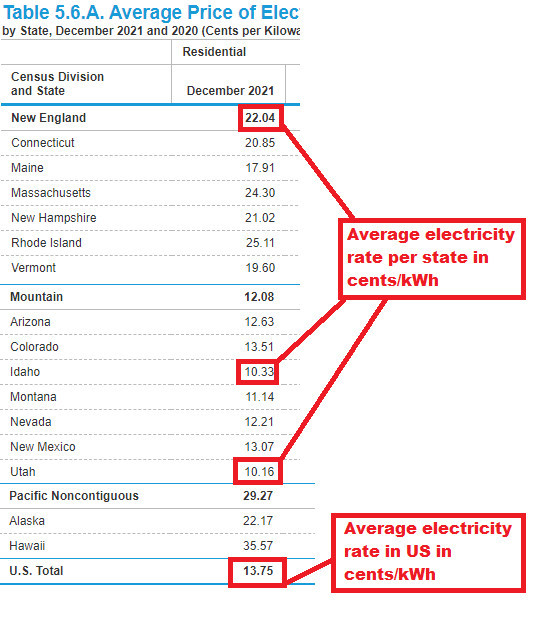 For example, in Connecticut, the energy price is around 21 cents/kWh, which is 50% higher than the average, the coffee maker running cost based on the above example would be between $1.5-$4.7 per month.

While in places like Idaho and Utah, where the rate is around 10 cents/kWh, which is around 30% less than the average, the monthly running cost of a coffee maker would range between $0.75-$2.25 per month.

Note that these are the costs of the electricity used by the coffee maker.

The total cost should include the cost of the coffee itself and the water, but mainly the coffee.

Saving Tips to Consider When Buying & Using a Coffee Maker

In order to keep the energy consumption and the running cost of a coffee maker at a minimum, here are few things to consider when shopping for a coffee maker: 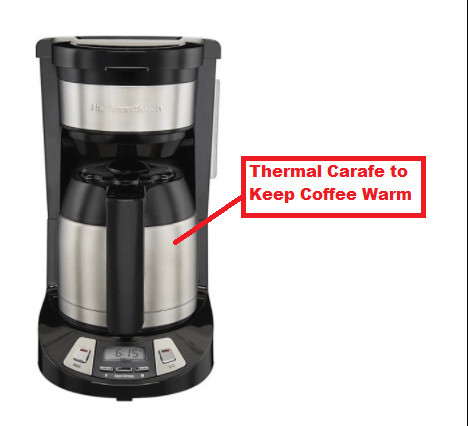 The coffee maker wattage is usually high as it needs energy in order to heat the water quickly and brew coffee, but the amount of energy consumed by the coffee maker is not that big, mainly because it only needs few minutes in order to brew coffee, which is similar to the electricity use of ovens, air fryers, and some other kitchen appliances with high wattage.

Consider the tips in the previous section in order to save energy and lower the running cost of the coffee maker.

I hope that my article was helpful for you and answered all of your questions.

If you still need help on this subject, please, tell me in the comments’ section, and I will do my best to help you out 🙂