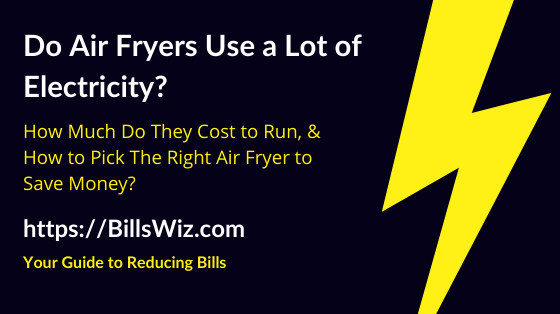 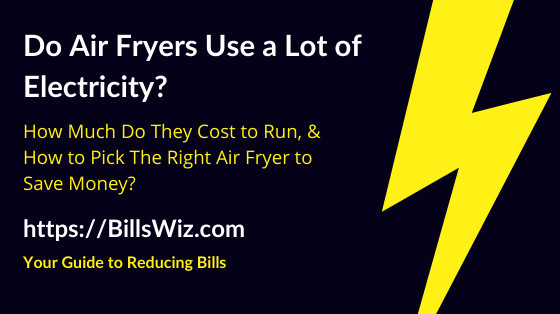 Does an air fryer use a lot of electricity? Is it expensive to run? And how much does it cost to run the air fryer every day?

How is the air fryer’s energy consumption compared to other cooking appliances like the oven, deep fryer, or microwave?

Does it increase or decrease your electric bill?

And how to pick the right air fryer in order to save money on the long run?

I’m an electrical engineer and a certified energy manager with more than ten years of experience, and I will answer these questions for you in a simple way in order to help you make a wise decision.

Do Air Fryers Use a Lot of Electricity?

Air fryers do not use a lot of electricity since they are not turned on all the time, although they are considered one of the heavy appliances that draw a high current when switched on, due to they high wattage rating.

For example, a standard air fryer may consume a little bit more electricity per hour than a 1,000-watt space heater, or around what a 6-gallon water heater consumes, but the total amount of electricity the air fryer uses in a day or a month would usually be lower than what is consumed by other appliances that cost the most to electric bill, because you don’t run the air fryer for as long as you run the water heater or the space heater.

How Much Electricity Do Air Fryers Use?

Air fryers use the average 1.5 kilowatt hours per hour of operation, which is close to what a 1.5-ton AC, a large space heater (1500 watt), or a 6-gallon electric water heater would use in one hour.

Air fryers may vary in electric consumption based on their size and manufacturer, and might range from 1-2 kilowatt hours per hour of operation.

The actual amount of electricity an air fryer would consume varies based on its size and on how long your run every day.

How Much Power (Watts) Does an Air Fryer Use?

An air fryer uses anywhere between 800-2,000 watts of power in order to run, depending on their size (capacity) and manufacturer.

For example, the iRUNTEK 1.3 quarts mini air fryer uses around 800 watts of power in order to run. 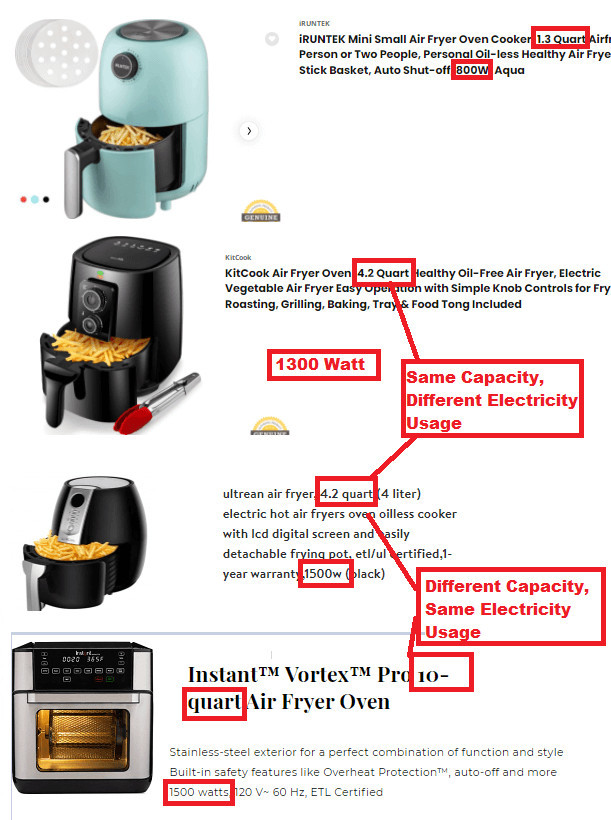 Are Air Fryers Expensive to Run?

Despite the high wattage, air fryers are not that expensive to run as they cook food fairly quickly compared to ovens for example, and you don’t need to run then for long periods of hours, like it is with other high-wattage appliances that run several hours a day such as the AC, space heaters, & water heaters.

How Much Does it Cost to Run an Air Fryer?

The average cost of running an air fryer is around 21 cents per hour, based on the average air fryer power rating of 1,500 watts, and average electricity rate of 14 cents per kWh. 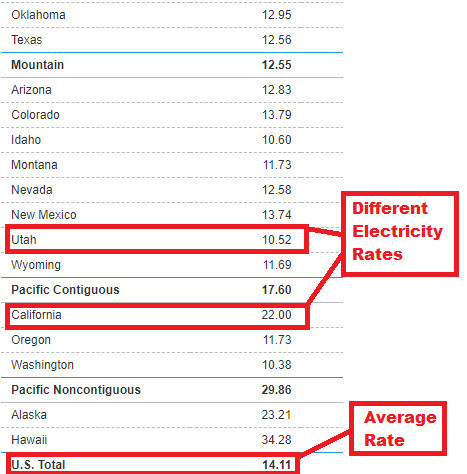 Under the same conditions, but at a higher electricity rate of 22 cents per kilowatt hour like it is in California, then the cost would be 1.5 kWh X 22 cents/kWh = 33 cents for one hour of operation.

And the same way, the cost would be higher or lower than the average of 21 cents per hour and $6.1 per month depending on the actual wattage of the air fryer you get, and the duration of running it over the month.

Air fryers are energy efficient and good in converting electricity into heat and circulating it inside the fryer’s container to help cook food faster and not waste energy.

The main things that make air fryers efficient in using electricity are:

No appliance is exactly 100% energy efficient, and this applies to the air fryer as some energy might be wasted through the heated metal enclosure. However, they are still more efficient than many other appliances like the oven for the reasons mentioned above.

Air fryers save electricity when used the right way as an alternative to an oven or even a microwave.

Do Air Fryers Use Less or More Electricity Than an Oven?

Are Air Fryers More Energy Efficient Than an Oven?

Generally speaking, yes, air fryers are more energy efficient than ovens because they have a more compact and smaller cooking container that makes preheating and cooking happen faster, which leads to using less electricity to give the necessary heat.

It is important to note though, that an air fryer could use more than oven in case that you have a very small air fryer and you need to cook amount of food that cannot fit inside the air fryer in one batch.

Cooking in batches would make the air fryer use more electricity than an oven that can cook the whole quantity in one batch.

However, there are now air fryers with big containers that allow you to cook a big quantity in one batch, or with dual baskets that work separately based on your needs, like the 8-quart Instant Vortex Plus air fryer for example. 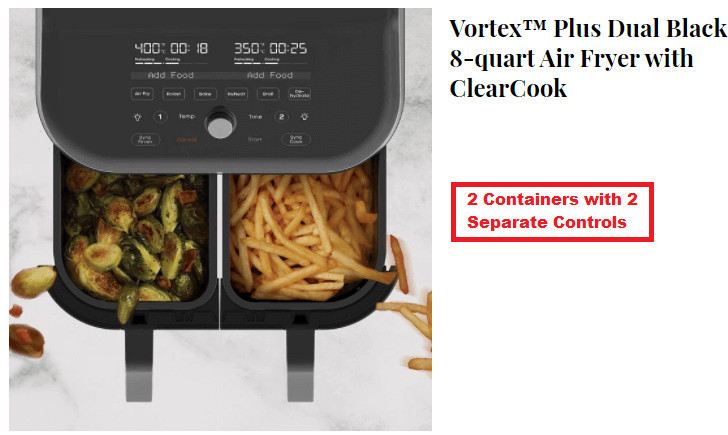 Does an Air Fryer Use More Electricity Than a Microwave?

The air fryer might use more electricity than a microwave as air fryers usually come with a higher wattage, and they might need a little bit longer to cook some food compared to microwave ovens.

However, it is important to note that the microwave might not be good for cooking all kinds of food as it is not as good as an air fryer in distributing heat, and it cannot heat thick food very well, which makes it not a good appliance to cook meat for example.

Also, because of the technology that microwave uses for heating food, it might cause some foods to dry, become chewy, and even lose flavor.

An air fryer will increase your electric bill if you are going to use it as an alternative to a gas-powered fryer, oven, or stove.

However, as an alternative to an electric oven, an air fryer would not increase the electric bill, but rather, would decrease it as the cooking time would be lower.

And as an alternative to a microwave, an air fryer might not really affect the electric bill as the cooking times are similar to the microwave’s cooking time.

And as an alternative to the deep fryer, while the cooking time in the deep fryer might be shorter, but usually, the deep fryer comes with a higher wattage, which makes the electric bill effect of both very similar.

Remember though that the microwave is not good for cooking all kinds of food compared to the air fryer, and the deep fryer can only cook in oil, which makes it very limited in what you can use it to cook, unlike some air fryers that allow you to cook, roast, fry, or bake.

Air fryers can help you save energy and lower your electric bill when used right, since they are more energy efficient than ovens.

Consider getting the right size you need in order to cook the whole meal in one batch.

The 2-quart air fryer might be cheaper to run as it comes with a lower wattage, but it might not be enough to cook a meal of more than two people, which means that you need to run it multiple time to cook on batches and pay more money for electricity with it.

If you have a big family, then consider buying an air fryer with a bigger capacity, even if it was with a higher wattage, as cooking in one batch with it will end up being cheaper than cooking multiple batches with a smaller air fryer.

Some air fryers come with dual containers like the Instant Vortex Plus with two separate controls, so that you can use them based on your needs and save every time.

I hope that my article was helpful for you and answered all of your questions so that you know that air fryers don’t use a lot of electricity when selected and used right, and now you know how much it costs to run the air fryer on average.

If you still need any help or have any question on this topic, please, let me know in the comments’s section below, and I will do my best to help you out 🙂