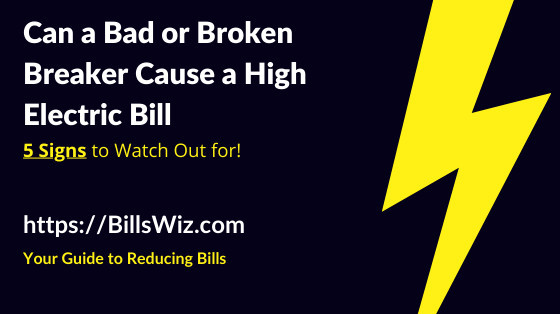 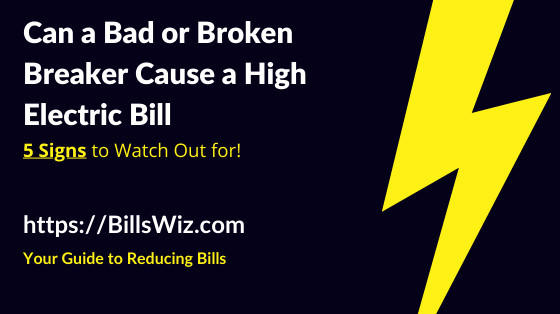 Can a bad breaker cause a high electric bill? Or is there no such a thing?

If it does, then is it worth it to replace the breaker, or should you leave it alone?

What causes a breaker to break down, how to tell if you have a bad breaker, and what other issues that might arise from a broken or a bad circuit breaker?

These questions and more I will help you know the answer for in order to stay safe and keep your electric bill as low as possible.

Without further ado, let’s jump in!

Can a Bad Breaker Cause High Electric Bill?

Yes, a bad breaker can cause a high electricity bill, and it could lead to incidents and injuries to people, and could lead to damages in the electrical panel, the wiring, and to different appliances.

It is always better to investigate and replace any bad or broken circuit breakers, not only to prevent them from increasing the electric bill, but also in order to protect your self and others from potential dangers, and to protect the different components of the electrical system and the appliances connected to it.

3 Causes of a Bad or Broken Circuit Breaker

There are many reasons why a circuit breaker might get broken and cause safety issues and increase electrical bills, such as: 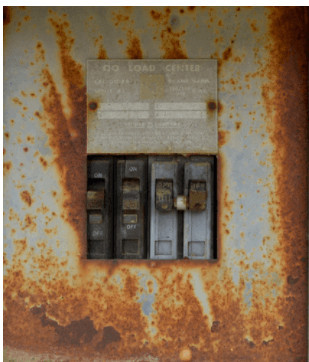 5 Signs a Bad Breaker is Affecting Your Bill

Discharging Sounds from The Panel

This sound might happen if you have a bad circuit breaker that is having an electrical discharge between its metallic parts that are carrying electric current, and the enclosure or any part of the panel.

This will cause an unnecessary consumption of electric energy and will lead to a higher electric bill because of this broken breaker, before the breaker finally breaks down and causes the main breaker to trip, or worse, damage the panel or other breakers.

Or maybe, one of the wires coming in and out of the breaker is loose, which makes the connection weak, and causes a small arc to happen in the air at the point of the connection, thus, cause the discharging sound.

Leaving this discharge happening will lead to overheating the wires and the breaker, leading to finally damaging them and probably causing an incident that might hurt someone or at least damage the panel.

If you see any signs of burning like a black spot inside the panel on the enclosure, on one of the breakers, or on the insulation of any of the wires, this means that an unnecessary discharge of electricity or arcing happened there, which could be due to a bad breaker or bad wiring, and that would lead to a higher electric bill if and incidents if left without inspecting and fixing it. 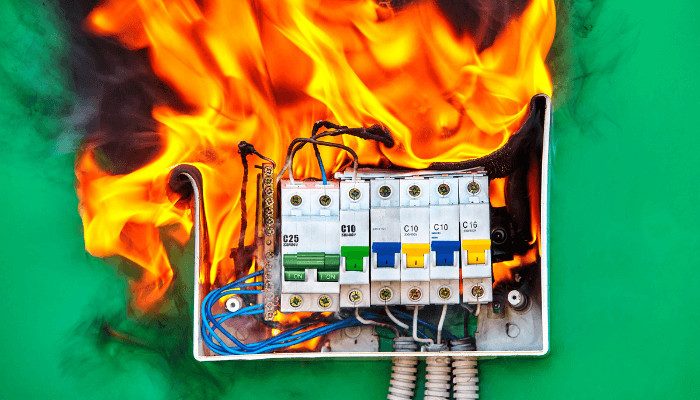 Unusual Smell from The Panel

Because bad breakers and faulty wiring inside the panel usually leads to short circuits or arcing, this leads to overheating the different components, such as the breaker itself and the wires connected to it, which cause the breaker enclosure or the wiring insulation melt down.

This can be the case if you can smell an unusual smell coming out of the panel.

Flickering in Lights or Interruptions in Appliances

If a discharge is happening at a bad breaker, this would lead to lowering the voltage level that is supplying the loads connected to the breaker or the panel itself, which would lead the lights to start flickering or not working in the first place.

And it would cause the difference appliances to have interruptions while operating, or, they wouldn’t be functioning at full speed if they had rotating parts like the fans for example.

Circuit breakers normally trip if the electrical current going through them went higher than their ratings, or if there’s a fault like a short circuit at the breaker, a discharging through arcing, or a fault at any point of the electrical system on wires, sockets, or on faulty appliances.

If you didn’t add any new appliances or didn’t have any change in behavior such as turning on a lot of appliances at the same time, then a circuit breaker trip would usually happen because of a fault.

This would usually lead to repeatedly tripping one of the circuit breakers, or maybe, the main breaker, due to the high current discharge that translates into a higher electrical bill if it was left without fixing.

You can visually inspect the panel after turning off the main breaker, to see if there are any visual signs of burning or an unusual smell.

If not, then it could be a fault somewhere in the circuit that is fed by the breaker that tripped, either in the wires, at the socket outlets, or lighting switches, or inside the lighting fixtures or the appliances themselves.

It is better to call a professional to inspect the electrical system components and find where the fault has happened.

A bad or a broken circuit breaker can increase your electric bill and might cause safety threats against people and animals, and if it was left without fixing it, it might damage other parts of the electrical system or even appliances.

Please, go through the list of the five sings of a bad breaker above, and see if you can identify if you have a problem with any circuit breaker or any part of the electrical system, or call a qualified electrician to investigate and fix any problem that might exist.

It is always cheaper and safer to fix a problem in the electrical system components as it arises before it escalates and causes injuries or damages.

I hope my article was helpful for you in knowing that a bad breaker can cause a high electricity bill and how to know if this is happening.

If you still have any question, please, let me know in the comments’ section below, and I will do my best to help you out 🙂