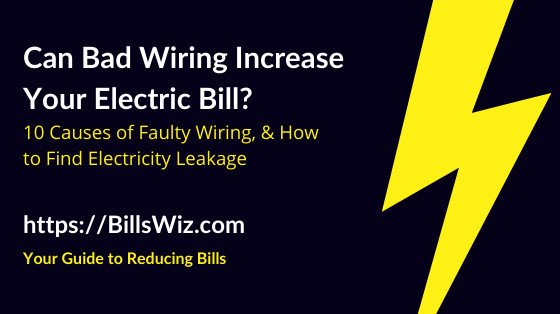 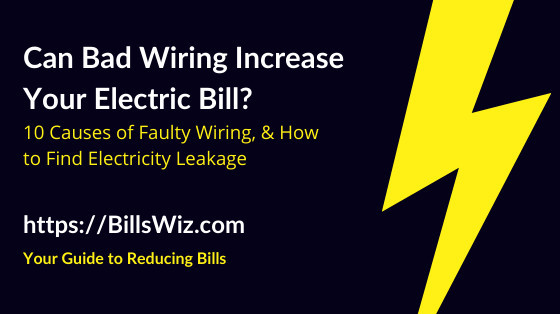 Can faulty wiring increase an electric bill, cause damages to the system and appliances, or cause injuries to humans and pets?

Should you worry about finding faulty points where electricity leaks from, or is it a minor thing?

I’m an electrical engineer, and I wrote this guide to help you know the effects of having bad wiring on electric bill and appliances, the causes that lead to such conditions, and how to find electricity leakage points.

Can Bad Wiring Cause a High Electric Bill?

Yes, bad wiring can cause an increase in the electric bill due to an arc discharge that might happen between two wires, or between a wire and any part of a certain appliance or system.

If you received an unusually high electric bill all of a sudden, then an electric arc discharge due to faulty wiring could be one of the many possible reasons, and you might need to investigate that as in following sections of this article.

And bad wiring can happen at different spots and due to different reasons, as you will learn now.

10 Reasons of Faulty Wiring That Could Increase The Bill?

Loading electric wires for more than their capacity can cause the insulation to melt down with time, and that would lead to discharge current happening even at times when no load is working on that circuit, which leads to getting a high electricity bill.

Wild animals, pets, and rodents have the habit of chewing electric wires, which creates weak spots in the insulation that leads to faulty wiring that might cause an electric arc. 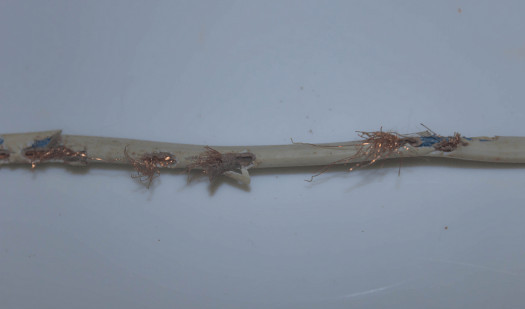 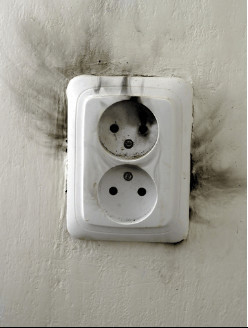 Old wiring can come with many issues, such as not following the best practices of safe electric installation, sizing is not sufficient for the modern day normal loads, moisture causing discharge currents to happen on frequent basis, …etc.

And all of this can cause the insulation of these cables to wear down and create faulty wiring that causes an increase in the electric bill.

Old power outlets and switches get worn out with time, and that might lead to create an arc current when they are supplying a load with electricity, which then creates heat, which in turn damages the insulation of the wires and of these parts, and causes a further discharge current to develop.

And as a result of the discharge current in this faulty wiring, you get a higher than usual electricity bill.

Faulty or broken appliances can lead to faulty wiring on the long run, as they might start to withdraw a higher than normal electric current, which might cause overloading at the wires and socket outlets, and thus, damaging the insulation and causing bad sparks and arc current.

Damaged by Other Appliances or Systems

If you have electric wires that are subject to moving parts of other systems, it might somehow pull the wires and cause loose ends.

Or maybe they are connected to a system that actually have moving part, like a ceiling fan, and the wires are so tight at the fan side that they get loosened with time due to the small movement the fan base gets when the fan is rotating.

Or maybe it the wires are close to some sharp edges, like a part of an HVAC duct, which vibrates a little bit when supplying air, and that might cause damage in the insulation of the electric wires over time.

This all can lead to faulty wiring that ends up creating discharge current between the wires and other systems’ parts or components, which builds up the electric bill.

Maybe you use the drill to add some screw in the wall or in the ceiling, and coincidentally, you hit one of the wires and caused small damage in its insulation.

This will lead to an exposed conductor that is now subject to discharging current with time through the walls or any metallic parts closed to it.

If you notice that a specific wall or part of the ceiling or of the floor is abnormally moisturized or wet, and it is close to a socket outlet, a lighting switch, or to an electric box that has any type of connection between two or more wires, then that might be a cause of a continuous discharge current that increases the electric bill. 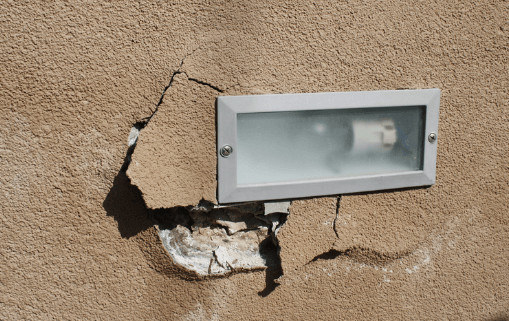 This could be due to poor insulation or some water leakage that is happening in the domestic water and sewage pipes, or even in the drainage pipes of the HVAC system.

Big part of the wires runs inside conduits under the floor and is installed during the construction stage.

Sometimes, the during this phase, some fittings of these conduits might get loose, or maybe someone broke a conduit and no one noticed that, and then the tiles were installed leaving wires subject to the filling material in the ground without any kind of mechanical protection.

Due to the weight imposed on them, their insulation might wear down at certain points, leading to a continuous discharge current to take place, leading to a high electric bill.

How to Check Electricity Leakage at Home & Detect Faulty Wiring?

Now that you have learned ten possible reasons of bad wiring and a discharge arc current, you need to know how to find where these problems exist and where the electricity leakage happens.

From a safety point of view, It is always better to call a specialist to inspect your home’s wiring for you and find any faulty points in the electrical system, but if you want to make a preliminary check, you might follow the following steps to conduct a basic inspection:

If you find a zone or circuit where you believe a discharge current is happening, then you might need to call an electrician to inspect further and find the exact point of leakage current and fix it, so that you stop getting a high electric bill due to bad wiring.

Conclusion – Should You Worry about Faulty Wiring?

Yes. Not only that faulty wiring can increase your electric bill, but it can damage different parts of your electrical system and appliances, and it might cause dangerous or even fatal situations with time.

I hope that you found my guide helpful and you understood how bad wiring can cause a high electricity bill.

If you still have any question on this or on any related topic, please, feel free to ask me in the comments’ section below.

And if you know someone who might need to read this, please, feel free to share it with them.