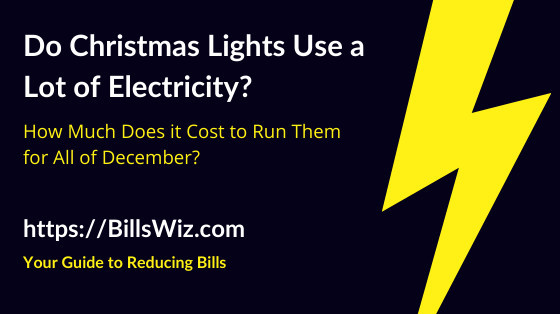 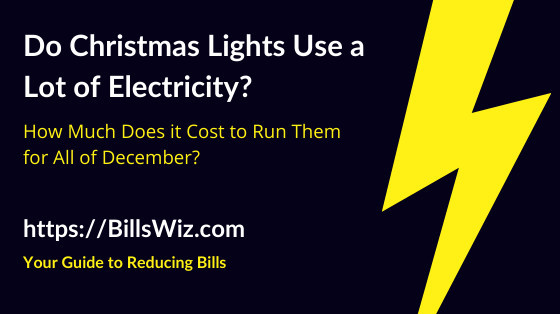 December’s electric bill is usually higher than the bill of most of the other months.

Is it because of the lights?

Do Christmas lights use a lot of electricity?

How much to they cost to run for the whole month of December? And can they affect your electricity bill significantly?

How to pick the right lights for Christmas trees and decorations in order no to pay a lot for using them?

I’m an electrical engineer, and I wrote this short guide in order to answer these questions and help you stop worrying about your December’s electric bill being affected by the colorful lights, and know where to focus your attention instead.

Do Christmas Lights Use a Lot of Electricity?

Christmas lights do not use a lot of electricity compared to other types of lights and electrical appliances, as they are made of a string of many small lamps, and usually of the LED type.

And as I explained earlier in another article, LED lights don’t use less energy compared to other types of lights.

How Much Electricity Do Christmas Lights Use?

On average, the amount of electricity one string of Christmas lights uses is usually between 6-10Wh (Watt-hour), or 0.006-0.01kWh (kilowatt hour) per one hour of operation, which is equivalent to what a single 6-10W lamp uses.

The exact amount of electricity the string of Christmas lights uses depends on the length of the string, the number of lights in it, and the power rating of each lamp.

How Many Watts Do Christmas Lights Use?

The commercially available Christmas light strings are usually rated between 6-10 Watts per string. 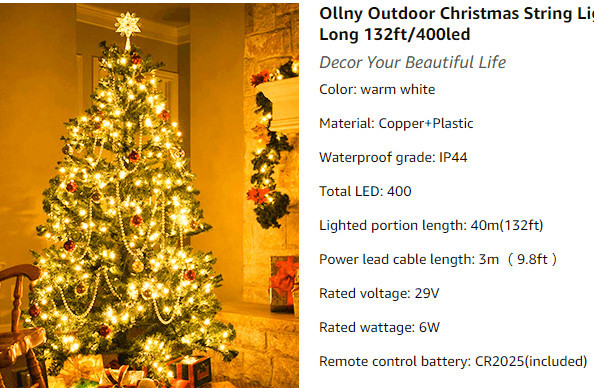 That’s how much power Christmas lights use per string.

And these strings range in the length between 25ft-164ft or even more, and the number of lights could be anywhere from 30-500 lights per string, depending on the total length and the size of each lighting unit or bulb.

How Much Energy Do Christmas Lights Use in Total in December?

The total amount of energy that all of Christmas lights use depends on how many strings you install, the wattage of each string, and for how many hours you keep them on for everyday during the whole month.

Assuming that you are using ten LED strings with the rating of 9 watts per string, that makes around 90 watts, the total power your Christmas lights use.

For the whole month of December, 1.08*31 = 33.5 kWh, the amount of energy the ten strings of Christmas lights would use.

How Much Do Christmas Lights Cost to Run?

For ten strings of Christmas LED lights with the rating of 9 Watts each, running them for 12 hours a day during the whole month of December costs around $5 in total, based on the electricity rate of 15 cents/kWh.

That’s the number of kilowatt hours consumed (33.5) multiplied by the cost of one kilowatt hour (around 15 cents or $0.15)

This is based on the number and rating of strings used in the previous example.

The exact cost might vary from one home to another depending on how many strings you use, and on how much your electricity company charges per kWh of energy used, as electricity companies usually charge different rates for many reasons.

For example, in Texas, the average rate is around 12 cents per kWh, which means that the total cost in the previous example would be 33.5*0.12 = $4 for the ten strings of Christmas lights that work twelve hours a day during the whole month of December.

While in a state like California where the rates average around 22.5 cents/kWh, then the total cost for the ten strings, for twelve hours a day of operation, would be around $7.5 for the whole month of December.

That’s how much it costs to run Christmas lights for a complete month.

How Much Do Christmas Lights Affect Electric Bill?

From the previous example, Christmas lights affect your electric bill by around 4 -7.5 dollars during the month of December if you turn on ten strings of LED lights for twelve hours a day for the whole month.

Compared to the total electric bill of December that usually exceeds $100, the effect of Christmas LED lights might not be significant.

Why Do I Get a High Bill in December if The Christmas Lights Don’t Affect it That Much?

This is usually related to the fact that electric bills in Winter are usually high for many reasons when compared to other seasons.

Some of the loads and systems that cost the most on electric bill are space heating and water heating, which are usually used more in Winter than in other seasons.

This is in addition to the fact that some electricity companies raise the rates during Winter, which further increases the total bill.

Do Christmas Tree Lights Use a Lot of Electricity?

No, Christmas tree lights don’t use a lot of electricity as they are usually made of small, energy-efficient LED lights. 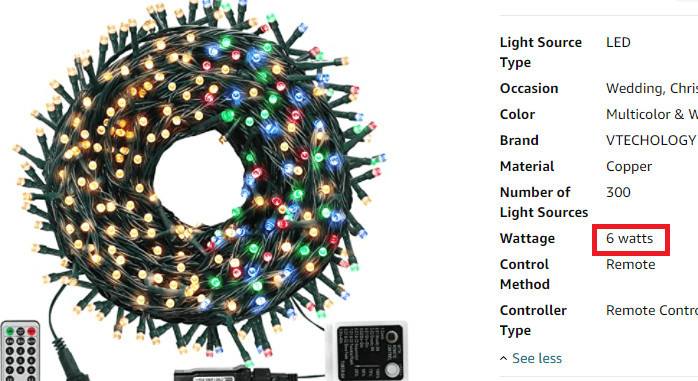 For example, a 105 feet string with around 100 LED lights comes with the total power rating of 6 watts.

And that’s a long string.

Even if you leave it on for 24 hours a day, for the whole month of December, then the total electric energy it would use would be:

Do String Lights Use a Lot of Electricity?

String lights do not use a lot of electricity if they consist LED lights, which is mostly the case these days. 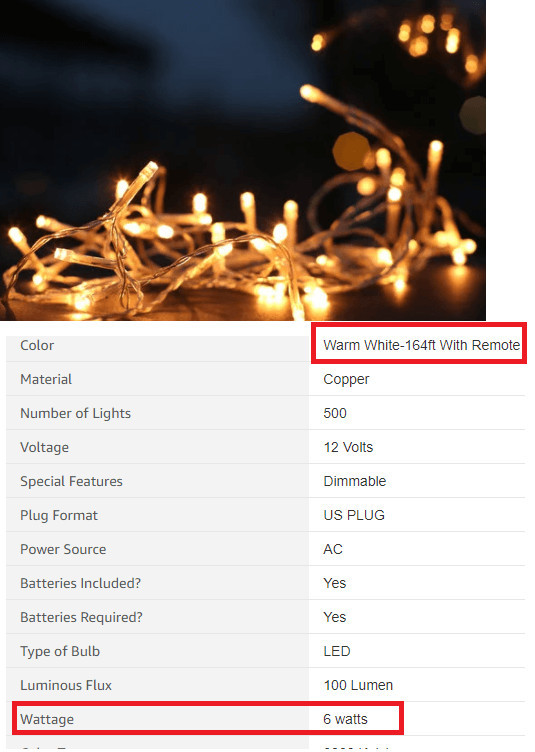 For example, if you have one string of 164ft with 500 LED lights with the total wattage of 6 Watts, operated for twelve hours a day for the whole month, the electric energy use would be:

Even if you have ten of this string working twelve hours a day, then the total cost at the end of the month would be around $3.3.

Do Fairy Lights Use a Lot of Electricity?

For example, a set of 12 strings of fairy lights with the power rating of 1.8W each, totaling 21.6W, operating for 12 hours a day, and for the whole month, the total electricity they consume would be: 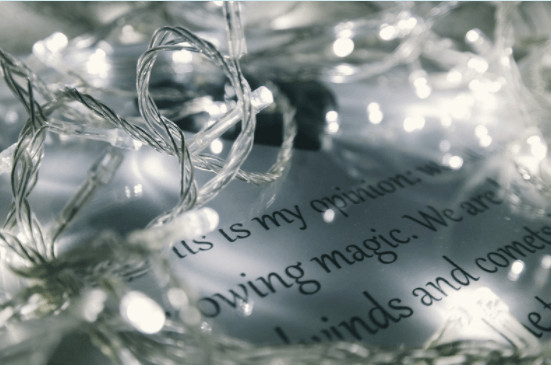 As you saw with the examples above, Christmas LED lights do not use a lot of electricity and don’t affect your electric bill significantly, even if you keep them on for the whole month of December.

What you should worry about is the consumption of all other appliances and systems, which increases during December, like it is with water heating and space heating.

In addition, there might be other people who come over and stay with you for several days, add to that the fact that you spend more time at home during this month, which causes you to use more energy.

You can check out these ways to save on electricity during winter, in addition to these ways to lower heating bills in winter in order to save money and spend it somewhere else.

And you may also consider generating electricity by yourself by installing a solar energy system for your home if you own the place, especially that many companies, like SunPower for example, can now help you get your system funded in full without paying a down payment.

You can visit their site to fill in the zip code of your area, and finish a 1-minute survey about your home, and they would call you to arrange for a free appointment to discuss the available funding options.

I hope this was helpful and insightful for you!

If you still have any questions about Christmas lights and their effect on your electric bill, or about anything related to this subject, please let me know in the comments’ section below, and I will do my best to help you out 🙂