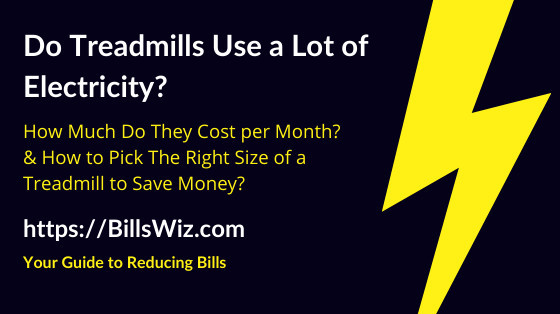 Are treadmills worth the investment, or are they expensive to run every day?

Do treadmills use a lot of electricity since they use electric motors?

What is the cost of running the treadmill at home, and is it cheaper than going to the gym?

And how to choose the right treadmill for you?

These questions and more, I will be answering in this short guide in order to help you make an educated decision and buy the right treadmill for you that doesn’t cost you a lot now to buy, and does not consume more energy than necessary.

Do Treadmills Use a Lot of Electricity?

Treadmills use motors that have the ability to use as much power as an electric space heater or an AC for example, but they do not operate on the full load most of the time, and they do are not work for as long as the air conditioner or the space heater.

The electricity consumption of a treadmill might change from one person to another, and from one session to another, even for the same treadmill, l based on the three factors that I will tell you about shortly.

How Much Electricity Does a Treadmill Use?

On average, a treadmill uses around 0.5 kWh to 1 kWh per hour of operation, depending on its motor’s rating, the user’s weight, the speed at which it runs, and the inclination level you set it at.

kWh stands for kilowatt-hour, which is the unit that the meters record for electricity consumption.

And the total consumption per day or month depends on the total usage of all sessions in that period of time.

Assuming that you run for around 15 minutes per day at a moderate intensity, then the total running time per week would be around 1.75 hours, which translates into around 0.9 kWh to 1.75 kWh per week that the treadmill uses on average.

And per month, the treadmill would use an average of around 3.75-7.5 kWh of electricity.

How Much Power (Watts) Does a Treadmill Use?

A treadmill uses an average of 500-1,000 watts of power when running, based on the average person that uses it for moderate intensity training.

Different treadmills come with different power ratings that are usually listed in the HP (horsepower) or CHP (continuous horsepower) unit.

That’s the rating of the electric motor that is used in that treadmill.

A horsepower is equivalent to around 746 watts.

The motor is selected based on the capabilities of the treadmill such as maximum running speed, maximum user weight, and maximum inclination degree for the belt. 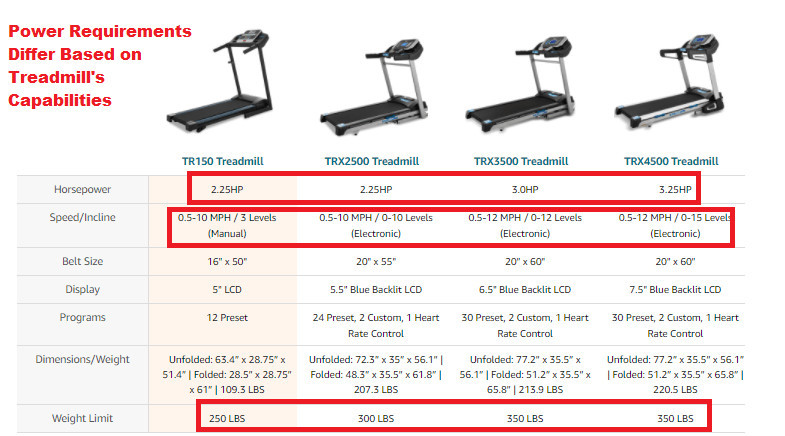 A treadmill that can be used to run at a 12 mph speed requires a bigger motor than the one that can run at the maximum speed of 6 mph.

And the same goes for the inclination degree.

However, the HP rating is the maximum power that the motor of that treadmill can consume under the condition when it is used at the maximum limits.

But the actual electricity consumption of a treadmill itself varies from one person to another and from one session to another even for the same person, based on three factors.

3 Factors That Affect The Actual Energy Consumption of a Treadmill

And based on that, the size or rating electric motor that runs the treadmill is selected (3.6 CHP – continuous horse power for example, which is around 2,650 watts).

And the same for any other treadmill with any other HP rating. 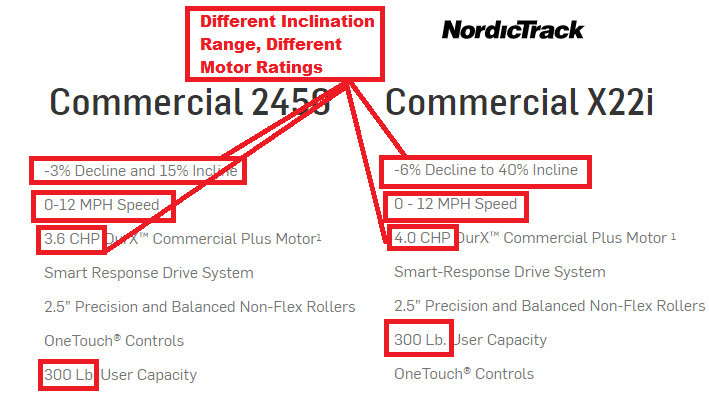 Will a Treadmill Increase Your Electric Bill?

The treadmill will increase your electric bill if it was a motorized treadmill that uses electricity in order to run.

Some treadmills, manual treadmills, do not use motors, and the built starts spinning once you start walking or running on it.

Are Treadmills Expensive to Run?

Treadmills are not that expensive to run as they do not usually run at the highest limits that use the highest electricity consumption, and they are not usually used for lots of hours a week.

How Much Does a Treadmills Cost to Run?

Per month, the treadmill would cost around $0.53-$1.05 based on the average conditions given earlier of running around 15 minutes at a moderate intensity, and using an average-sized of a treadmill of around 1-2.25 HP.

The exact cost of running the treadmill might differ based on the power rating of the treadmill you have, the intensity of your training, your weight, the duration of each session, and the total duration of all sessions in a month, and on the electricity rate at your area, since electricity companies charge different rates.

If you run for a complete hour everyday, then the average consumption would be 0.5-1 kWh per day, and 15-30 kWh per month, which would cost between $2.1-$4.2 per month at the average electricity rate.

And if you live in a place like Connecticut where the electricity rate is around 23 cents per kWh, then the average cost of using the treadmill per month would be between $0.82-$1.65 per month based on the average running time of 15 minutes a day at a moderate intensity. 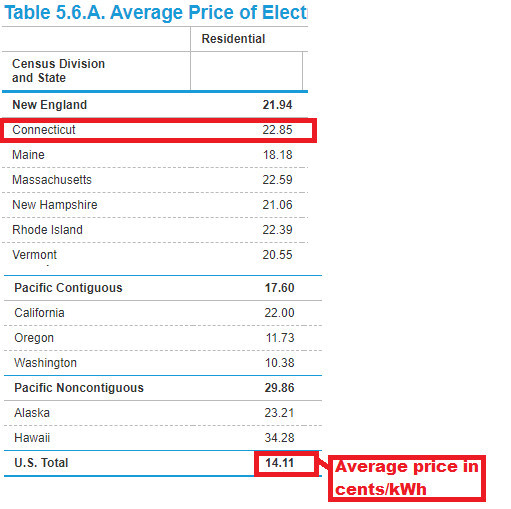 And when used for a complete hour every day at a moderate intensity, then the cost would be between $3.45-$6.9 per month.

How to Choose an Energy Efficient Treadmill?

Most of the new treadmills are made using energy-efficient components like motors, controllers, and screens.

The display screens of treadmills do not use a lot of power that you should worry about, but can use the display you want based on your needs as each one comes with different options for running apps and integration with other devices.

To make the best use of your investment of a treadmill, get one that has the limits that meet your running abilities in terms of speed and inclination degree, or the one that can meet the future abilities you want to achieve.

Also, make sure that it can handle your weight, or the weight of the heaviest person who would use it if you expect others to use it.

Choosing a treadmill with much higher capabilities than your current and future needs and abilities would usually means that you would over invest in a “bigger size/rating” treadmill that would cost you more to purchase, and it would come with a big motor that would use more electricity than needed when compared to one with a motor that gives capabilities closer to your needs.

If you don’t expect anyone to use the treadmill to run at a faster pace than 6 mph, with a weight that doesn’t exceed 250 pounds, then do not purchase a treadmill with the ability to run at 12 mph or accommodates the user weight of 400 pounds.

Conclusion – Treadmills Do Not Cost a Lot to Run

Having a treadmill at home can be cheaper for you than paying for the gym membership in case that you go to the gym just to run on a treadmill.

And you might even need to pay for transportation if the gym is distant from you.

The cost of running the treadmill does not add a lot to the electricity bill, and it depends on the electricity prices at your area, on the power rating of your treadmill, and on your usage.

But in general, Treadmills do not use a lot of electric energy and do not cost a lot of money to run.

I hope that my short guide was helpful to you and answered all of your questions on this topic.

If you still need any help, please, let me know in the comments’ section below, and I will do my best to help you out. 🙂

1 thought on “Do Treadmills Use a Lot of Electricity?”