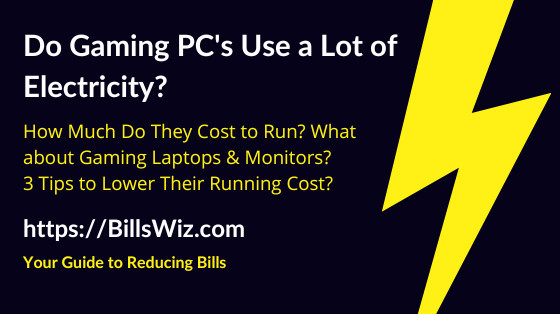 Do gaming PC’s and laptops use a lot of electricity when playing video games or when they are in idle mode?

What about gaming monitors?

How much do gaming desktop and laptop computers add to your electric bill every month? And how can you lower their energy consumption and running costs?

I’m an electrical engineer, and I wrote this short article in order to help answer all of these questions for you.

Do Gaming PC’s Use a Lot of Electricity?

Gaming PC’s can use a lot of electricity even though their wattage lies in the medium range (300-850 Watts), because they are usually used to play video games for many hours a day, and they are usually left in idle mode even when not playing, which consumes energy.

Even compared to normal desktop PC’s that are used for work and for studying for long hours, gaming PC’s consume more electricity as they draw more powers in terms of Watts when running in order to run the necessary parts such as the GPU, CPU, RAM, fans, …etc.

Do Gaming Laptops Use a Lot of Electricity?

Gaming laptops used a little bit more electricity than normal laptops as they have a relatively higher wattage that is necessary to run the electronics and the cooling fans inside the laptop.

How Much Electricity Does a Gaming PC Use?

On average, a gaming PC uses around 1.5 kilowatt-hours of electricity per playing session of two hours, which accumulates into around 10.5 kWh’s a week, and around 45 kWh’s a month, assuming the average gaming PC wattage of 750 Watts, and the daily playing time of 2 hours. 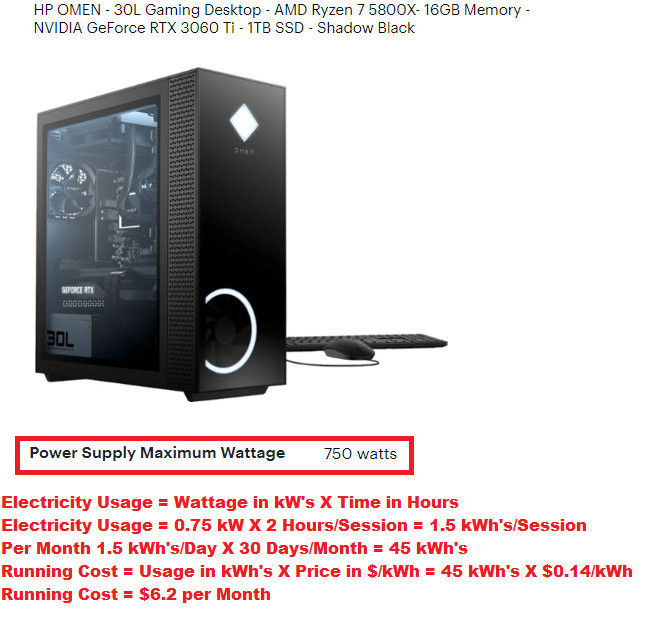 Note that this is an average estimate based on the average gaming PC wattage, and average playing session duration.

The actual electricity usage of a gaming PC differs from a gamer to another depending on the actual total playing time, the actual wattage of the gaming computer they own, and the game being played.

For example, a Gen Z gamer might play for four hours a day, which translates into 3 kWh’s of electricity consumed per day, 18 kWh’s per week, or 90 kWh’s per month, assuming the gaming PC draws around 750 watts of power while playing.

In addition, if you leave the gaming PC on idle mode when not playing instead of turning it off, then it would consume additional electricity, around 0.05 kWh/hour, which accumulates into around 1 kWh per day, or an additional 30 kWh’s per month.

Also, gaming PC’s might differ in the power they draw while running, from 300 watts into 850 watts or more, depending on the system components and the game requirements.

How Much Electricity Does a Gaming Computer Use Per Hour?

Per hour, a gaming computer consumes between 0.3 – 0.75 kWh of electricity depending on its wattage and the game requirements.

This is when playing a game.

And when not playing, if the gaming computer was left on idle mode, then it would consume around 0.02-0.1 kWh per hour.

How Much Electricity Does a Gaming PC Use Per Month?

Per month, a gaming PC uses around 45 kWh’s of electricity when running for two hours a day, and around 90 kWh’s when playing for four hours a day, every day, with the average wattage of 750 Watts.

How Much Electricity Does a Gaming Monitor Consume?

A gaming PC monitor consumes around 0.05 kWh per hour of playing, which accumulates into around 3 kWh’s per month based on the average daily playing session of 2 hours.

How Much Electricity Does a Gaming Laptop Use?

And if it was left in idle mode when not playing, it would consume an additional 1 kWh per day, or 30 kWh’s per month.

These are average estimates, and the actual electricity consumption of gaming laptops changes from one gamer to another based on the playing time duration, the actual wattage of the gaming laptop, and the games being played.

How Much Power Does a Gaming PC Use?

A gaming PC uses anywhere between 300-850 Watts of power in order to run when playing video games with it, and between 20-100 Watts when in idle mode.

How Many Watts Does a Gaming Laptop Use?

A gaming laptop uses between 150-300 Watts of power when playing video games with it, and around 20-80 Watts when left in idle mode. 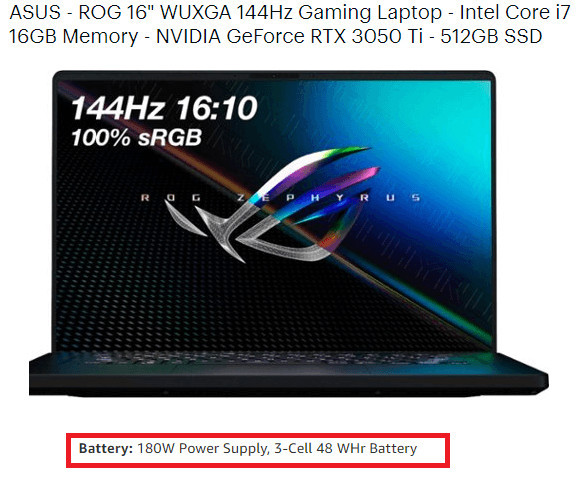 How Much Power Does a Gaming Monitor Use?

A gaming monitor uses between 30-180 Watts of power when running, and a few Watts when in sleep mode, with around 50 Watts for the most commonly used gaming monitors of 24″-27″ size. 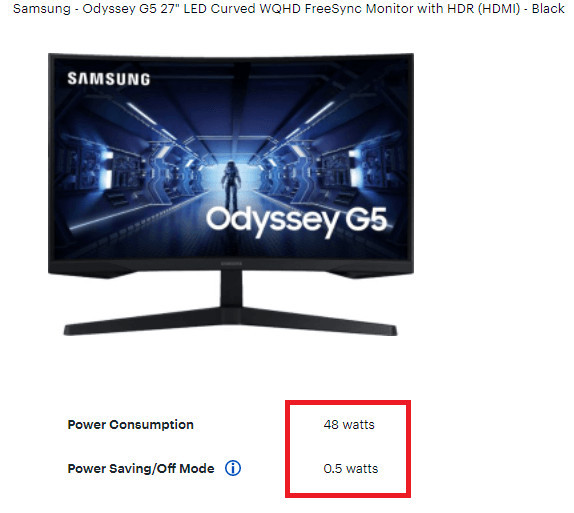 The energy consumption of a monitor depends on its size and specifications, the time it is left on or in the “sleep” mode, and on the games’ requirements.

Are Gaming PC’s Expensive to Run?

Gaming PC’s can be expensive to run if you have a high end gaming desktop with a relatively high wattage of around 700 Watts or higher, and if you play for several hours a day, every day.

And it gets more expensive when you live in a place where electricity rates are high, as you will see in the coming section.

How Much Does a Gaming PC Cost to Run?

A gaming PC costs around $6.3 per month in order to run, assuming the average wattage of a good gaming PC of 750 Watts (including monitor), average daily playing time of 2 hours, and average electricity rate of 14 cents/kWh.

And assuming a playing time duration of 4 hours per day, every day of the month, then the gaming computer running cost would be around $12.6 per month.

This is just the running cost for the playing time, assuming that you turn off the gaming PC when you are done playing.

However, if you leave the gaming computer on idle mode all the time when you are not playing, then it would consume an additional 30 kWh’s per month, which costs around $4.2/month based on the average electricity price of 14 cents/kWh, that you need to add to the cost estimates above.

All these estimates are based on the average gaming PC wattage, average playing time, and average energy rate.

How much a gaming PC adds to your electric bill might differ from one person to another based on their usual playing time, the games played, the gaming PC they have, and the actual electricity rate as different companies charge different energy rates from one location to another. 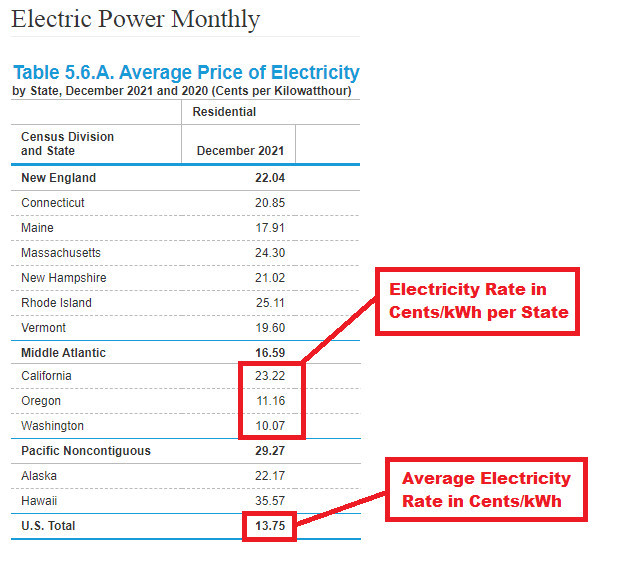 How Much Does a Gaming Laptop Cost to Run?

A gaming laptop costs around $2.1 per month in order to run for two hours a day, every day of the month, and around $4.2 per month for four hours daily playing sessions, assuming the average gaming laptop wattage of 250 Watts, and average energy rate of 14 cents/kWh.

And if your leave the gaming laptop on idle mode all the time when not playing, then that would cost an additional $4.2 per month, making it in total $6.3 per month and $8.4 per month for the 2-hour and 4-hour daily playing time gamers respectively.

As you just saw, gaming PC’s can consume a lot of energy if you run them for several hours a day, and if you leave them on idle mode all the time when not playing, which might add up to $15 per month or more to your electric bill, based on its wattage, how long you play every day, and the electricity rates.

Follow the previous tips in order to save on energy and electric bill with your gaming PC or laptop.

And if you still have other questions on this topic, please, let me know in the comments’ section below, and I will do my best to help you out 🙂