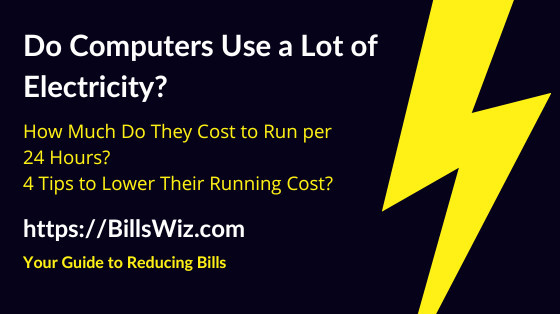 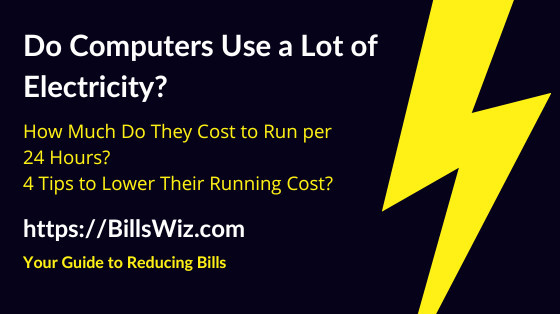 Do computers add a lot to your bill?

How much electricity does a computer use in order to run per day and per month?

What’s the difference in energy usage and running cost between desktops and laptops?

And how to save on energy and money when buying and using a PC?

I am an electrical engineer, and I will help you find all the answers you want in this short article.

Do Computers Use a Lot of Electricity?

Computers do not consume a lot of electricity per hour as they usually have a low wattage (60-400 Watts), but can add a few dollars to electricity bill if they were left on for several hours a day.

Another thing that might make your personal computer use a lot of electricity is leaving it on idle mode instead of turning it off when you don’t need it, which, despite drawing a lower wattage during that state, adds up to the bill when left in that mode during all the time when you don’t use it.

Do Laptops Use a Lot of Electricity?

Laptops use less electricity that desktop computers with their lower wattage (60-150 Watts), and they can be considered among the appliances that do not use a lot of electricity per hour, but they can add to the bill if you use them for several hours a day.

How Much Electricity Does a Computer Use?

A personal computer uses around 0.2 kilowatt-hour of electricity per hour of use, which accumulates into 1.6 kWh per day, and 48 kWh’s per month, assuming that you leave it on for eight hours a day, every day of the month, with the average wattage of 200 Watts. 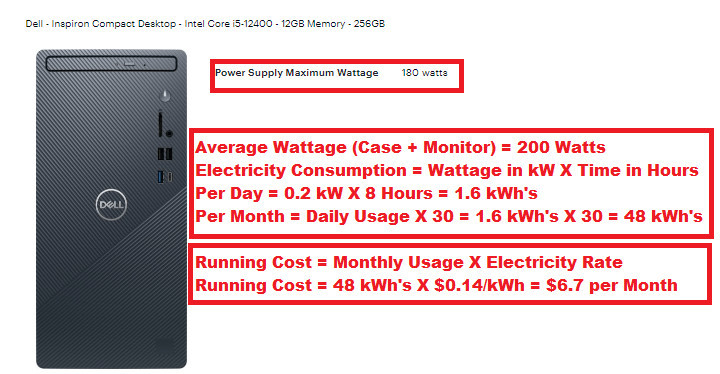 This is regarding personal computers that are used for work or entertainment, while the electricity usage of a gaming PC can be higher as they require more resources and come with a higher wattage.

Note that a computer does not have to always use all of the power capacity in order to run, but that might change depending on the usage of the same resources of the computer.

For example, using the computer to play videos or run a software that requires lots of the CPU’s and GPU\s capacity requires more power that what it draws when using it to play music and work on an MS Word document.

How Much Electricity Does a Computer Use in Sleep Mode?

Leaving the computer on sleep or idle mode when you are not using it instead of turning it off can consume an amount of electricity that might reach 1 kWh per day, or 30 kWh’s per month.

How Much Electricity Does a Computer Use in 24 Hours?

In 24 hours, a computer uses around 2.6 kWh’s of electricity if it was used only for 8 hours, and left on idle mode for 16 hours, and it uses around 4.8 kWh’s if it in use all the time with no idle mode or off-time.

How Much Electricity Does a Laptop Use?

On average, a laptop uses around 0.1 kWh per hour of usage, or 0.8 kWh per day, and 24 kWh’s per month based on the average laptop wattage of 100 Watts, and daily usage of eight hours a day.

And when left in idle mode when it is not being used, a laptop might consume an additional around 0.5 kWh per day, or 15 kWh’s per month.

How Much Electricity Does a Laptop Use in 24 Hours?

How Much Electricity Does a PC Monitor Use?

A computer’s monitor uses an average of 0.05 kWh of electricity per hour of usage, which leads to around 0.4 kWh per day and 12 kWh per month based on the daily use of eight hours a day, and average monitor wattage of 50 Watts.

The actual energy consumption of a PC monitor differs from one user to another based on the actual wattage and on the total time of usage.

And the actual wattage of a monitor changes based on the size of the screen, its technology (LCD, LED, ..etc.), its capabilities, and whether it was dimmed or not when in use.

The idle mode of a PC monitor does not consume a significant amount of energy as its wattage might be lower that 5 watts or even lower that 1 Watt.

How Much Electricity Does a Monitor Use in 24 Hours?

How Many Watts Does a Computer Use?

A computer uses between 60-400 Watts of power in order to run, and the actual power usage depends on the capabilities of the actual computer, the pattern of use, and how much of its resources are being used at any moment in time.

The PC wattage might differ from one unit to another depending on the components and on their capabilities.

And a PC of a certain wattage might not draw all that power all of the time, but rather, the power consumption correlates to the amount of resources being used, which depends on what the PC is being used for: running heavy softwares, playing games, editing documents, playing videos, …etc.

Another important thing that affects the amount of power a computer draws is the cooling that is done through the internal fans, which is why you should locate the computer in a place with a good air circulation, and not in a room’s corner or too close to the wall where the fan will have to keep running at full speed all of the time.

How Many Watts Does a Desktop Computer Use?

A desktop PC uses anywhere between 100-400 Watts of power when running, depending on the usage of its resources which are affected by the jobs it’s doing, and around 50 Watts when in idle or sleep mode.

How Many Watts Does a Laptop Use?

A laptop uses between 60-200 Watts of power when being used, and around 30 Watts when left in idle or sleep mode. 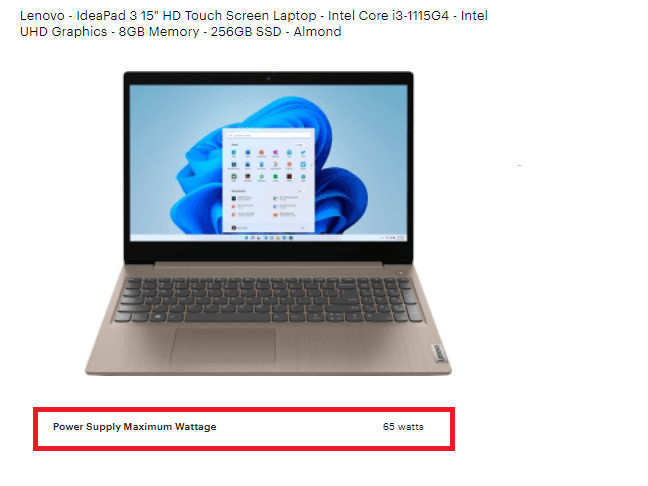 How Many Watts Does a Computer Monitor Use?

On average, a PC monitor uses between 25-40 Watts of power in order to run, considering the popular monitor sizes of 17-27″, and the wattage goes up with the size of the monitor, and might reach up to 150 Watts for some 40″+ monitors. 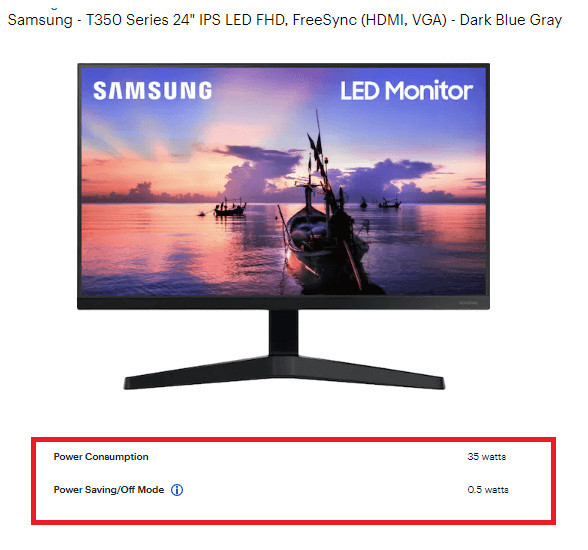 That power usage of a monitor might be lower in case you leave it dimmed most of the time.

How Much Does a Computer Cost to Run?

A computer costs around $6.7 per month in order to run, based on the daily usage of eight hours, average PC wattage of 200 Watts, and average electricity price of 14 cents/kWh.

The actual running cost of a computer will change from one user to another based on the actual PC wattage, actual usage time, pattern of use, and electricity price.

When used for 24 hours, a 200-Watt computer would cost around $20 per month with the average electricity rate.

And when used for 8 hours a day, and left on idle mode for the remaining 16 hours, the daily consumption would be around 2.6 kWh, and the PC running cost would be:

And in the same way, the computer’s running cost would change if the electricity prices in your location where different from the average. 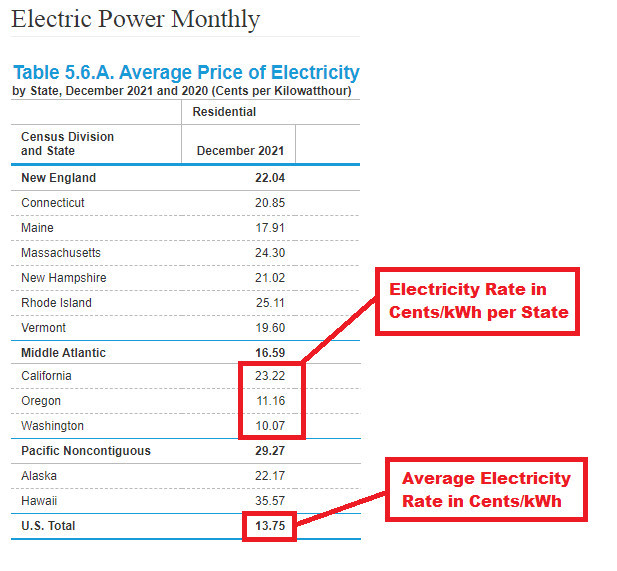 How Much Does a Laptop Cost to Run?

A laptop costs around $3.4 per month in order to run, when used for around eight hours a day, every day of the month, based on the average laptop wattage of 100 Watts and average energy rate of 14 cents/kWh.

When in use all the time, 24 hours a day, a laptop would cost around $10 per month to run.

And when used for 8 hours a day, and left on sleep mode for the remaining 16 hours (total consumption of 1.3 kWh/day), the laptop’s running cost would be around $5.5 per month.

4 Tips to Save Energy & Money with Your Computer

Here are four tips that can help you save energy and money when buying and using your desktop or laptop computer:

As you just saw, computers don’t use a lot of electricity in general, and their running cost can vary from $3-$10 a month based on the average wattage and average usage patterns.

Follow the tips in the previous section in order to keep your computer’s energy consumption and running cost as low as possible.

And if you still need help or have other questions on this matter, please, leave them in the comments’ section below, and I will do my best to help you out 🙂