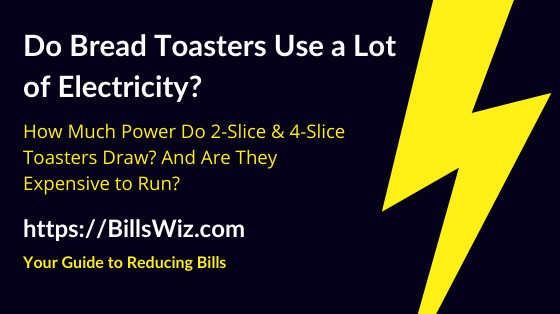 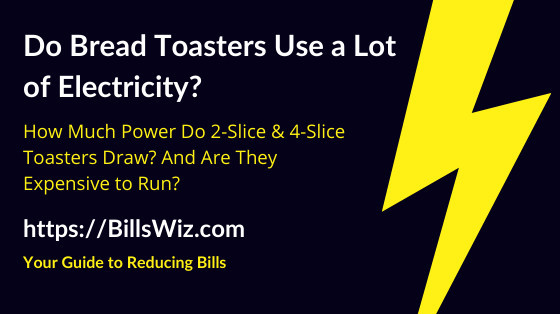 Do toasters use a lot of electricity and cost a lot to run?

How many watts do 2-slice and 4-slice toasters use?

And how much do they cost to run per person in a month?

Is it cheaper to you use a slice toaster machine, or a toaster oven?

I’m an electrical engineer, and I wrote this short article in order to help you answer all of these questions before you make a decision in buying a toaster or not.

Do Bread Toasters Use a Lot of Electricity?

Toasters do not use a lot of electricity despite their high wattage, as they only run for few minutes per use, and their effect on the electric bill is relatively low, with around $0.5 per month per person with the average consumption of 4 slices per day.

This is similar to the electricity usage of coffee makers for example that have high wattage, but run for short periods of time in order to do their job.

How Much Electricity Does a Toaster Use?

On average, a toaster consumes around 3.6 kiloWatt-hours of electricity per month per person in order to toast 4 slices of bread per day.

For two people with the average consumption of 4 slices a day per person, the toaster would use around 7.2 kiloWatt-hours per month, and so on. 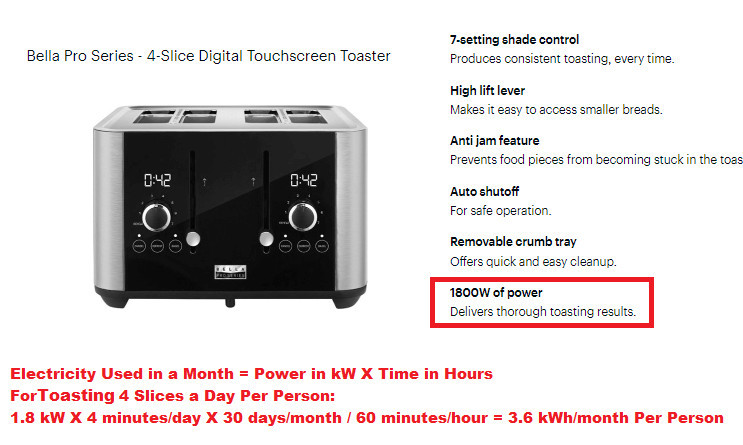 The actual electricity usage of a toaster might differ from a house to another based on:

How Many Watts Does a Toaster Use?

These are the average power ratings of bread toasters, and some might have a higher or a lower wattage than others. 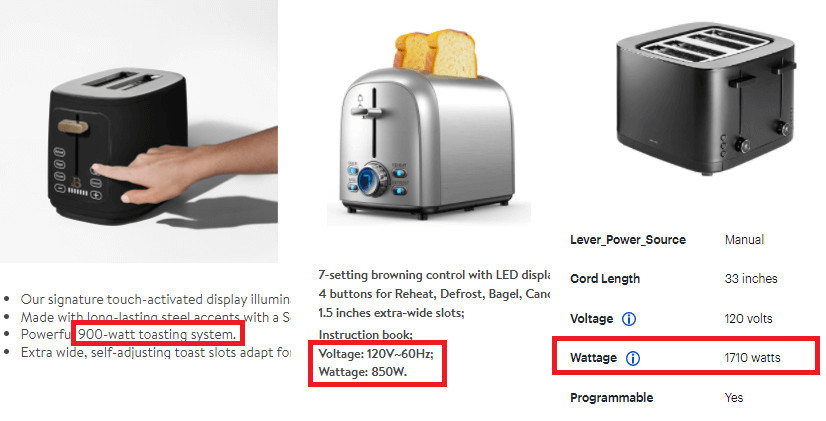 Note that the lower wattage with the same bread capacity (4 slices for example) might increase the time necessary to toast slices of bread, which increases the energy consumed (what you get billed for), but anyway, most toasters take only between 1-4 minutes in order to finish their job.

How Much Energy Does a Toaster Use?

A toaster uses an average of 3.6 kWh’s (kilowatt-hours) of energy a month per person in order to toast four slices of bread a day, every day of the month.

For a family of four people, the energy consumption of a toaster would be around 14.4 kWh’s (4X3.6).

How do we calculate the energy usage of a toaster in simple math?

For one person that consumes four slices of toast per day, every day of the month, using a 1,800-watt (1.8 kW) toaster that takes 4 minutes per session (therefore, one session per day):

For a 4-person’s family:

Are Toasters Expensive to Run?

Bread toasters do not cost a lot to run since they are usually energy efficient and do their job in a short period of time, and don’t need long preheating time like toaster ovens for example that take between 5-15 minutes in order to preheat.

How Much Does a Toaster Cost to Run?

A toaster costs around 50 cents a month to use per person, with the average bread consumption of 4-slices of toast per day, average wattage of 1,800 watts for a 4-slice toaster, and average electricity rate of 14 cents/kWh.

As in the example above, on average, the toaster consumes around 3.6 kWh’s of electricity per person per month.

And since the average electricity rate is around 14 cents/kWh, then the monthly cost of using the toaster per person would be:

Note that these are estimates based on the average bread consumption, average toaster wattage and toasting session time, and average electricity rate.

And the actual running cost of a bread toaster would change based on the actual wattage, session time, bread consumption, and electricity price as every energy company charges a different rate. 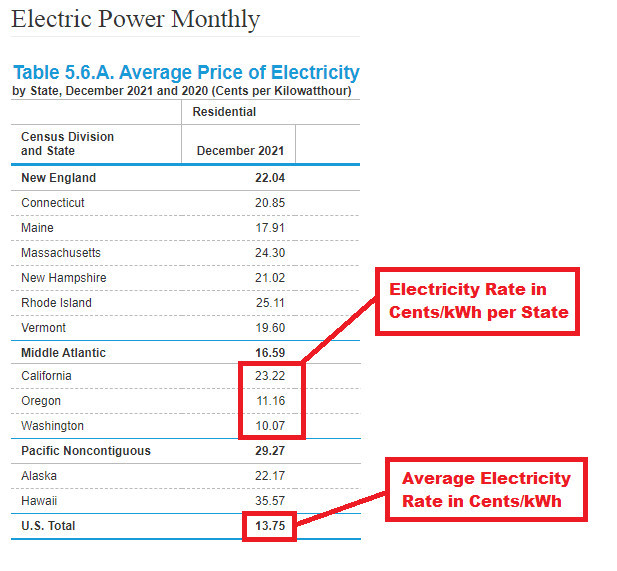 For example, in California, the rates are 50% higher than the average, which means that the monthly cost of using a toaster there would be around 75 cents per person per month.

And in other places like Idaho or Utah, the rates are lower, which results in a lower running cost.

But overall, toasters do not add a lot to electricity bills since they run for short periods of time, once or few times a day.

Bread slices can be toasted either by a toaster oven or by a bread toaster.

It is important to note that toaster ovens need between 5-15 minutes to preheat, before taking around another 6-10 minutes in order to toast the bread slices (3-5 minutes for each side).

This makes the bread toaster machine consume less energy per slice when toasting 2 or 4 slices, in addition to the fact that it does a better job in evenly toasting slices.

Also, toaster machines take less time and are more convenient compared of having flip the slices when using a toaster oven.

A toaster oven might be slightly cheaper to use when toasting bread if you want to toast a big number (e.g. 20 or more) of slices at once, assuming that the oven fits for toasting all of the quantity in the same session.

Conclusion – Are Bread Toasters Worth it?

Bread toasters can be worth it since they do their job efficiently, quickly, conveniently, and at a low cost, allowing you to enjoy the benefits of toasting bread without a big addition to your bills.

The electricity usage and the cost of running a bread toaster are not significant despite the high wattage, mainly because they are used for short periods of time, once or few times a day.

I hope that this short article was helpful for you.

If you still have other questions related to toasters’ energy usage or running cost, please, tell me in the comments’ section below, and I will do my best to help you out 🙂