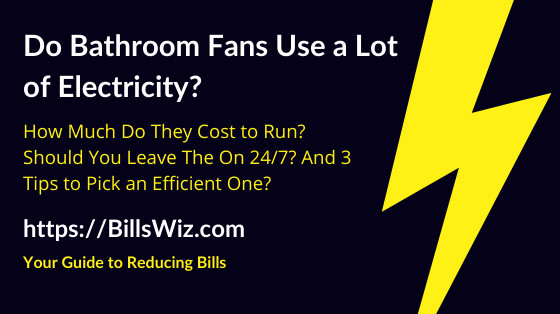 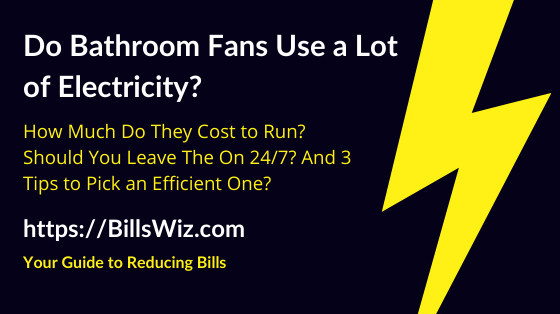 Do bathroom fans use a lot of electricity and significantly affect your electric bill?

Or do they actually save you money?

Is it fine to leave a bathroom exhaust fan on all the time?

And how to choose the right extractor fan for your bathroom?

I wrote this short article in order to help you out with these questions, so that you know if a bathroom fan was a problem, or a must have.

Do Bathroom Fans Use a Lot of Electricity?

Bathroom fans do not use a lot of electricity and they are considered among the small appliances similar to medium-large LED lights, and usually, they consume less than the electricity usage of box fans, standing fans, attic fans, …etc.

Bathroom fans are necessary to keep the bad smell out of your bathroom.

In addition to that, bathroom extractor fans help in minimizing the moisture build-up by extracting the humid air to the outside, which helps prevent mold and mildew, reduces the maintenance needs and costs, and prevents health issues caused by them.

At the same time, this reduces the electricity usage of the dehumidifier, which has a higher wattage than exhaust fans, as you would need to use it for a shorter time compared to when you don’t use the bathroom exhaust fan.

How Much Electricity Does a Bathroom Fan Use?

On average, a bathroom exhaust fan uses around 40 watts of power to run, which results in around 0.04 kilowatt-hour per hour of use.

Assuming that you leave the bathroom fan on for the total of five hours a day, that means that it uses around 0.2 kWh’s of electricity per day.

In a month, the bathroom extractor fan would consume around 6 kWh’s of energy. 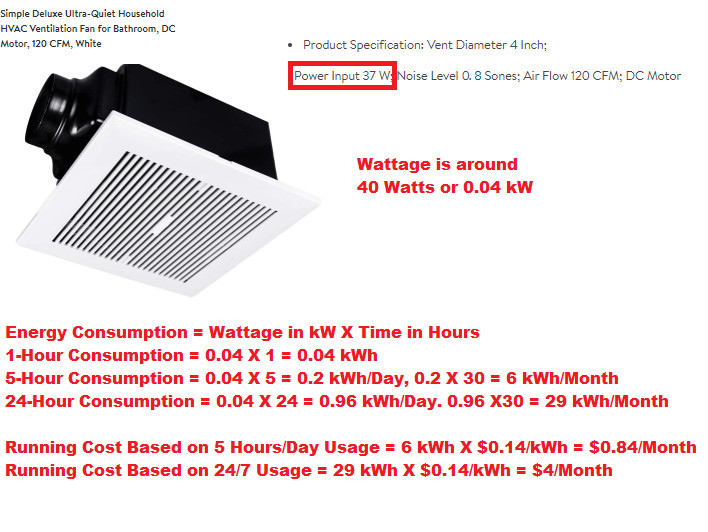 The actual energy consumption of a bathroom exhaust fan would differ based on the actual wattage of the fan you have, and based on how long you leave it on.

How Much Electricity Does a Bathroom Exhaust Fan Uses in 24 Hours?

If you keep the bathroom fan running all the time, then it would use around 0.96 kWh in a 24-hour period, accumulating into around 29 kWh’s per month.

How Many Watts Does a Bathroom Fan Use?

Most bathroom fan use between 20-60 Watts of power in order to run, depending on their running speed and the air volume extract rate. 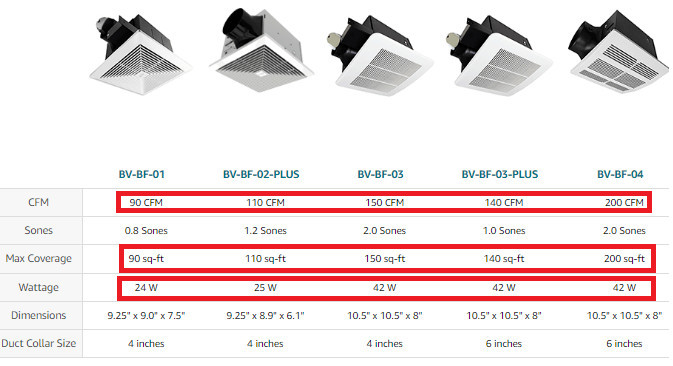 Some extractor might use higher power rating than others while extracting air at the same rate, and in that case, which means that they are lower in efficiency.

Try to look for Energy Star certified bathroom fans in order to make sure that you consume as low energy as possible, and check different options with similar efficiency and good reviews for the lowest price.

Note that some bathroom fans might have built-in lamps, and the wattage on their nameplates usually indicate the total power drawn by both, the lamp and the extractor fan.

How Much Does a Bathroom Fan Cost to Run?

A bathroom fan costs around 84 cents per month in order to run for five hours a day, every day of the month, based on the average wattage of 40 Watts, and average electricity price of 14 cents/kWh.

This is the average running cost of a bathroom extractor fan.

The actual cost would vary depending on the actual wattage, actual usage, and on the energy rates that your company charges as prices change from one place to another.

For example, in Washington, for the same bathroom fan and the average usage of five hours a day, you may end up paying 30% less than the estimate above as electricity in Washington is around 30% cheaper than the average. 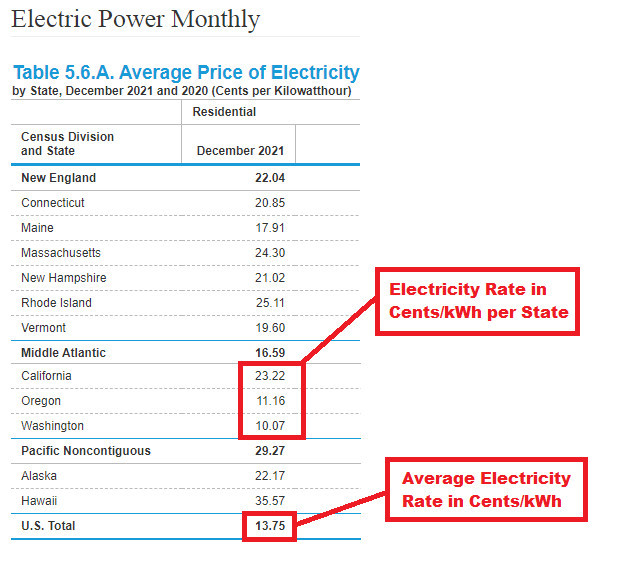 And in California, you may pay 50% higher than the estimate above for the same bathroom fan wattage and usage as the electricity rates are around 50% higher there.

It costs around 13 cents per day, or $4 per month, to run a bathroom fan 24/7, non-stop, based on the average wattage of 40 Watts, and average electricity rate of 14 cents/kWh.

Is it OK to Leave a Bathroom Fan On All The Time?

It is better not to leave the bathroom fan on all the time as that would cause its motor to wear faster, heat up, and probably start a fire.

Also, it will accumulate dust faster if you leave it on all the time, which might clog the rotor of the fan and make it run slower, which increases the time needed for it to do its job.

It is better to leave it on for a maximum of 20-60 minutes after you use the bathroom, until the bad smell and the moisture goes out, and then turn it off.

Do not sleep or leave home for long hours with the bathroom fan on.

Should You Run The Bathroom Fan While Showering?

The addition to your electric bill won’t be that significant, especially when you compare it to the savings you make on the maintenance costs.

Here are some tips to help you choose the right and efficient bathroom fan in order to save energy and money:

Conclusion – Bathroom Exhaust Fans Can Save You Money

Bathroom fans can be helpful in eliminating the problems that result from the moisture build-up due to the humid air, provide a more comfortable condition, and they don’t use a lot of electricity in order to do so, and don’t add a lot to your bill.

Follow the tips in the previous section in order to pick the right bathroom exhaust fan, and save money on the short run and on the long run.

And if you still have any question, please, tell me in the comments’ section below, and I will do my best in order to help you out 🙂