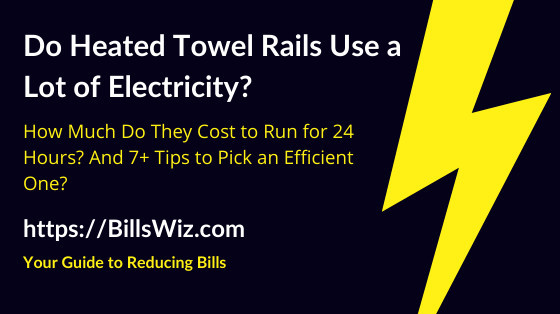 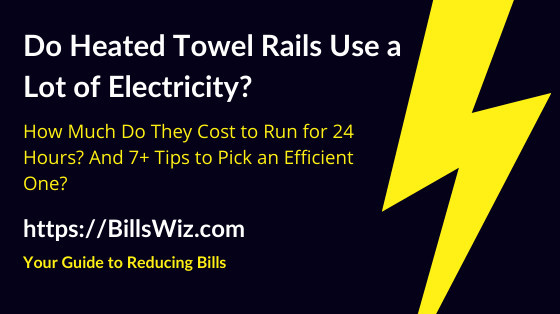 Towel warmers can provide convenience and promote a healthy living by keeping your towels dry and warm.

But do heated towel rails use a lot of electricity and increase your electric bill?

How much would they cost you to run all the time? Do they have to be on 24/7?

I’m an electrical engineer, and I will answer all these questions for you in order to help you choose and use the right electric towel rail the right way and save energy and money.

Do Heated Towel Rails Use a Lot of Electricity?

Heated towel rails do not use a lot of electricity if you use them when needed or on intervals, resulting in a consumption of less than 1 kilowatt-hour a day, and around $3-$5 added to your electric bill per month.

This is when we are talking about the small-medium wattage (up to 150 watts) electric towel rails that work for 6-8 hours a day.

However, if you use a heated towel rail with a higher wattage, it might use a little bit more electricity, especially if you leave it on for several hours a day.

And in case you want to leave the electric towel rail on all the time, then you better get one that is lower than 100-watts in rating in order not to consume a lot of energy.

How Much Electricity Does a Heated Towel Rail Use?

On average, an electric heated towel rail uses around 1 kilowatt-hour of electricity per day, or 30 kilowatt-hours per month, based on the average wattage of 125 watts, and assuming that you leave it on for around 8 hours a day.

But that might not be necessary as the heated towel rail would usually do its job in drying out the towel within 2-3 hours.

And many electric towel rails come with a timer that you can set in order to turn the towel rail off within 2-4 hours.

The actual electricity usage of a heated towel rail might change based on the actual wattage and the actual duration of using it.

For example, you might have more than one towel that you need to dry out, or you might use the towel more often that it stays moisturized all the time.

In those cases, you may need to use a heated towel rail of a higher wattage, 300-watt for example, or you might need to keep the small or average electric towel rail on for longer hours or even all the time.

How Much Power Does a Heated Towel Rail Use?

A heated electric towel rail uses around 125 Watts of power in order to run on average, but the available heated towel rails come in a wide range of wattage, starting from 40 Watts, all the way up to 300 Watts, or even more for industrial ones. 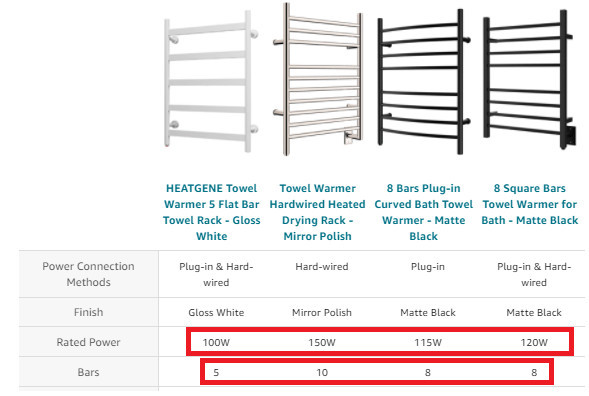 The towel rails with higher wattage might have the room to warm more than one towel at the same time, or one towel with a shorter time.

How Much Energy Does a Heated Towel Rail Use?

A towel rail uses around 1 kWh of energy per day on average, which is close to the energy consumption of an efficient fridge.

The actual energy usage of an electric heated towel warmer depends on two main factors: its wattage, and the number of hours you leave it on.

How Long Do Electric Towel Rails Take to Heat Up?

Most electric towel rails take up to 15 minutes in order to heat up and start warming the towels, they might need up to one hour in order to reach the optimal temperature.

Should Heated Towel Rails Be Left On All The Time?

In most cases, you don’t need to leave the heated towel rails on all the time as they usually do their work and get the towel day in 1-4 hours, depending on the size of the towel, how moisturized it is, and the towel rail’s wattage.

That’s why many electric towel rails come with a timer that allow you to set how many hours you want it to work before it automatically shuts off.

And many come with an internal safety shut-off mechanism that would turn them off when reaching a certain temperature level in order not to over heat the towel rail bars.

Some people might prefer to leave the towel warmers on all the time because they want the towels to feel warm all the time, and if this was the case for you, then you better get a lower-wattage heated towel rail (46-80 Watts for example), in order to save energy, and keep the towel soft as over-drying a towel makes it lose its soft structure. 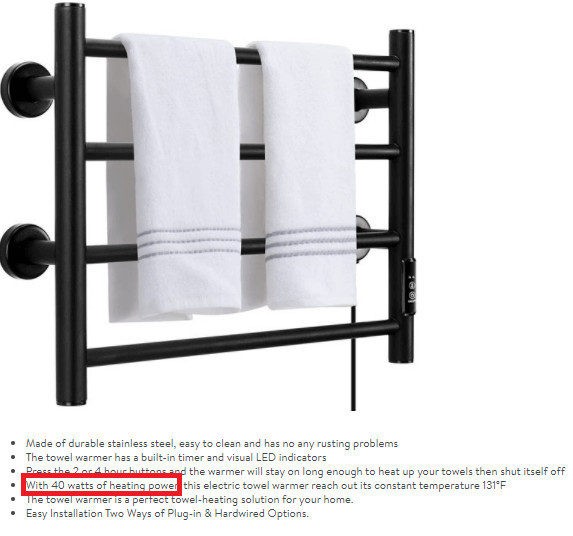 Electric heated towel rails are not expensive to run based on the average usage, which amounts into only few dollars a month.

This might increase into more than ten dollars a month if you leave the heated towel rail on all the time, which is why you should consider a lower-wattage one in that case.

How Much Does a Heated Electric Towel Rail Cost to Run?

A heated electric towel rail costs around $3-$5 a month in order to run, based on the average wattage of 125 Watts, average usage of 8 hours per day, and average electricity price of 14 cents/kWh.

Such estimate can be reached as follows:

Note that this is an estimate based on the average towel warmer wattage, average usage, and average energy rate.

The actual running cost of the heated towel rail might change by changing any of these three factors.

For example, leaving the same towel rail on all the time would triple its cost of running to become around $12.6 per month.

Also, the actual electric towel rail running cost would change based on the location, as energy companies charge different rates from one place to another. 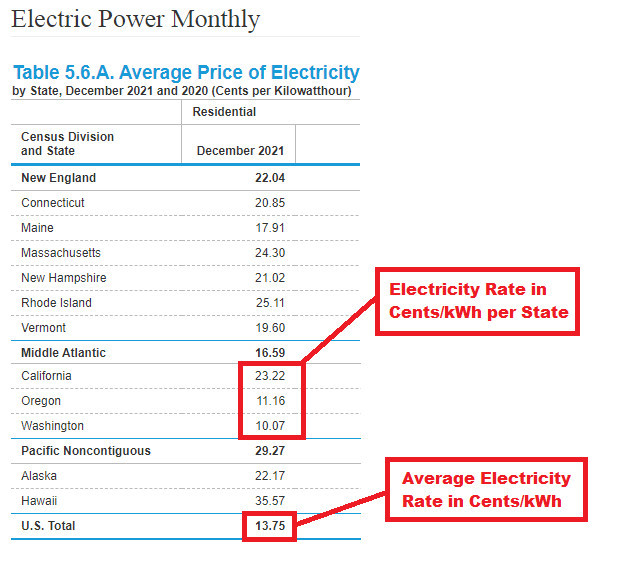 Here are few tips to help you choose electric towel warmers that do the job and do not consume a lot of electricity: 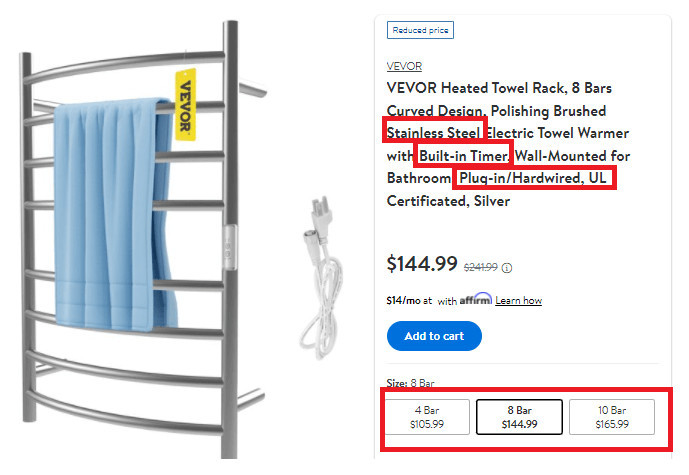 Electric heated towel rails can be helpful as they keep your towels dry and warm, which offers some sort of convenience, and promotes a healthier lifestyle as wet towels can be a good environment for growing bacteria.

And heated towel rails don’t use a lot of electricity, less than the electricity consumption of tumble dryers for example, which means that they don’t add a lot to your electricity bill when used properly.

Follow the tips in the previous section in order to pick and energy efficient electric towel rail and save energy and money.

And if you still have a question on this topic, please, let me know in the comments section below, and I will do my best to help you out 🙂