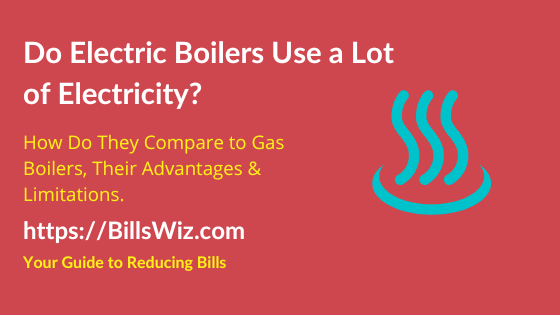 Do electric boilers use a lot of electricity? Do they cost a lot to run?

Are they expensive to run, and how do they compare to gas boilers?

Should you use a heat-only or a combi electric boiler?

I’m an electrical engineer with more than ten years of experience, and I wrote this short article in order to help you answer these questions so that you make the right decision as the answers to these questions change from one place to anther, and from one user to another.

Do Electric Boilers Use a Lot of Electricity?

Electric boilers use a lot of electricity when they are running compared to most other home appliances, and they can be one of the appliances that add the most to electric bills during the cold months of the year.

The cost associated with using electric boilers depends on your hot water needs, the size of the boiler, and on the electricity rates in your area.

And compared to using gas boilers, the running cost of electric boilers might be either higher or lower depending on the efficiency of each boiler, and on the prices of gas and electricity.

However, electric boilers are easier to install and require less maintenance due to their components.

How Much Electricity Does an Electric Boiler Use?

On average, electric boilers use around 10 kWh’s (kilowatt-hours) of electricity per hour when they are running, which accumulates into around 100 kWh’s per day, and 3,000 kWh’s per month assuming that you leave the electric boiler running for ten hours a day, every day of the cold months.

Notice that this is an estimate based on the average electricity rating of electric boilers (with a tank) of 10 kilowatts, and on the usage of ten hours per day. 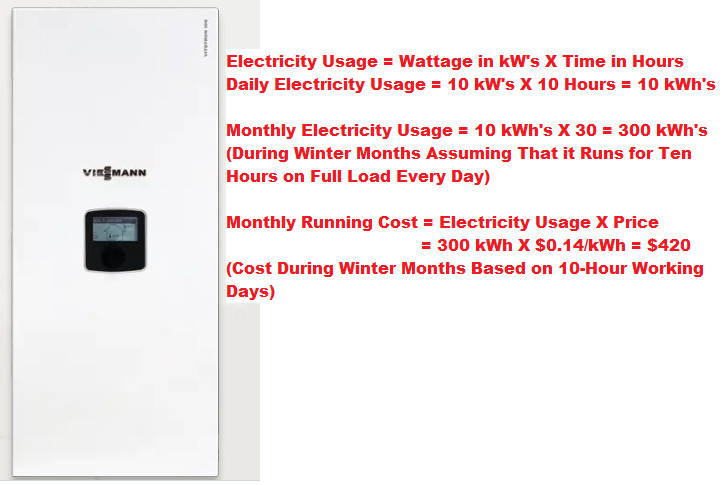 The actual usage of electricity by an electric boiler might differ from one user to another based on the size of the area the boiler will serve, the number of heating radiators, the temperature you leave the thermostat on, the insulation of house or apartment, and the usage of hot water through taps and showers.

A 10-kW might be good for a small-medium size apartment or a small house with around 6-7 radiators and one or two bathrooms.

Larger homes and apartments require larger boilers, and the electric boiler with a tank.

Also, the temperature you set the thermostat on will affect the energy consumption of the electric boiler as each one degree higher would require more electricity to be used by the boiler.

Yes, electric boilers are highly efficient to the limit of around 99% or higher, which makes them a greener option to use when compared to gas boilers.

Are Electric Boilers Expensive to Run?

Electric boilers can be expensive to run as they consume a lot of electricity when they are running, and their running costs might be higher than the running costs of equivalent gas boilers that are used to give hot water and heating for the same place.

Depending on the size of the boiler you have, the weather, the insulation of your house or apartment, your use of hot water, an electric boiler might be the appliance that costs you the most on electricity during the cold months.

Electric boilers might cost more when running as electricity prices are higher than, but this is not always the case.

This makes electric boilers more costly to run in most cases, unless gas prices surge a lot when electricity rates remain almost the same.

But important to note, is that electric boilers are easier to install and maintain, and cost less for both: installation and maintenance, and they require less area, which makes them more suitable for smaller homes and apartments.

However, there’s a limit on the sizes of available electric boilers as they draw a high electric current when running, which is limited by the size of the wires, fuses and breakers in the electric panels at homes, which makes gas boilers a more popular option for larger homes.

And when it comes to safety, electric boilers might seem safer as they don’t emit carbon monoxide like gas boilers, which might be dangerous if the exhaust system had a leak.

How Much Does an Electric Boiler Cost to Run?

An electric boiler costs around $1.4 per hour in order to run, based on the boiler size of 10 kilowatts, and on the electricity price of 14 cents per kWh.

When running for ten hours a day at full load, every day of the month, the average electric boiler would cost around $14 a day, or around $420 a month.

But this might happen for five to six months a year, while during other months, you might not need to run the electric boiler as you don’t need heating to be on.

The actual cost of running an electric boiler would differ from one user to another based on:

For example, during the coldest months, the electric boiler would work harder and for longer hours in order to give and maintain the same temperature inside the house or apartment. 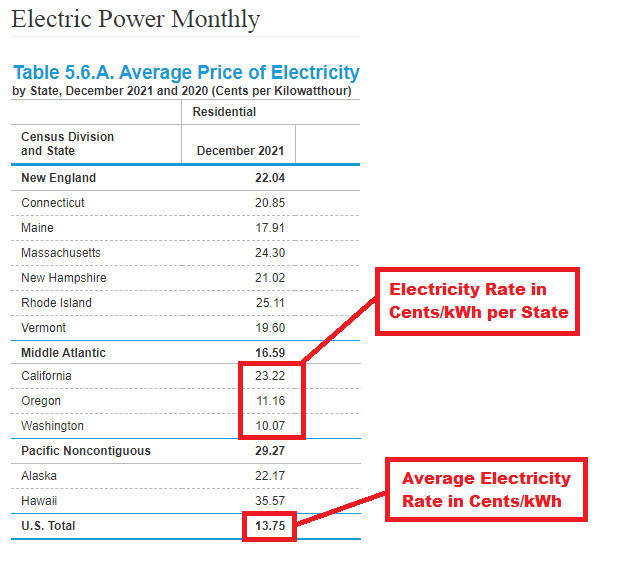 These are the main two types of electric boilers available.

Heat-only electric boilers use a tank in order to store hot water and keep it available for use all the time, while combi electric boilers provide heat water on demand when you open a tap or a shower head, or when the temperature in the water running through the home heating system drops below a certain temperature.

That being said, when used for the same place with the same heating and hot water needs, combi boilers draw higher power levels when they are running for shorter periods of time, which require bigger electric circuits.

But the amount of energy they use might be lower than the energy used by heat-only electric boilers since the latter store hot water in tanks, which lose some heat and waste energy, no matter how good their insulation is.

However, for frequent use of hot water from multiple points at the same time, combi electric boilers might not be able to catch up with the demand, unless you use even bigger units, which again, is limited by the capacity of wires and circuit breakers in your system.

This makes combi electric boilers a better option for smaller places with low to moderate demand for hot water, and with one to two bathrooms, and heat-only electric boilers for larger spaces when hot water is usually required through multiple points at the same time, and when the electric system can’t handle big electric combi boilers.

Conclusion – Should You Use an Electric Boiler?

There’s no one answer that fits all situations.

Their running costs might be higher than gas boilers’ running costs, unless gas prices are too high, but their installation and maintenance works are easier and usually cheaper, in addition to the fact that they might be a bit safer to use, which justifies the running cost difference for some people.

The limitation with electric boilers comes from the fact that they draw big currents that not all electric circuits can handle, which make them suitable for small to medium size homes and apartments.

And combi electric boilers can be more energy efficient than heat-only electric boilers that use storage tanks for hot water, but they require even bigger circuits in order to run, and thus, they are more limited and fit better for apartments and smaller houses with low-moderate instantaneous hot water usage.

In order to make the right decision based on your exact requirements, it is better to consult a specialist in electric water boilers as these cost a lot, and you don’t want to buy a boiler that you realize later that you can power from your home’s circuit, or that it is not sufficient to supply your home’s needs of hot water.

I hope that this article was helpful and answered all of your questions about the electricity usage and running costs of electric boilers!

If you still have other questions on this topic, please, let me know in the comments’ section below, and I will do my best in order to help you out 🙂